With the retirement of long-time group leader Athol Brown, new convenors Renee McGlashan and Ed Bennett have taken over this group in 2020. the group meets every second Friday morning.

Enoggera Creek flows from the Enoggera Reservoir which was built in the 1860s and increased in height after the 1974 floods. The first (uppermost) SOWN site on the creek is Yoorala Street West.

In early 2016, SOWN began working with SEQ Water and Brisbane City Council to restore a large area north west of the original Yoorala Street West plantings and towards the Enoggera Dam.

The photo shows volunteers planting around 500 native trees and shrubs at the first SOWN community planting on 9 April 2016. 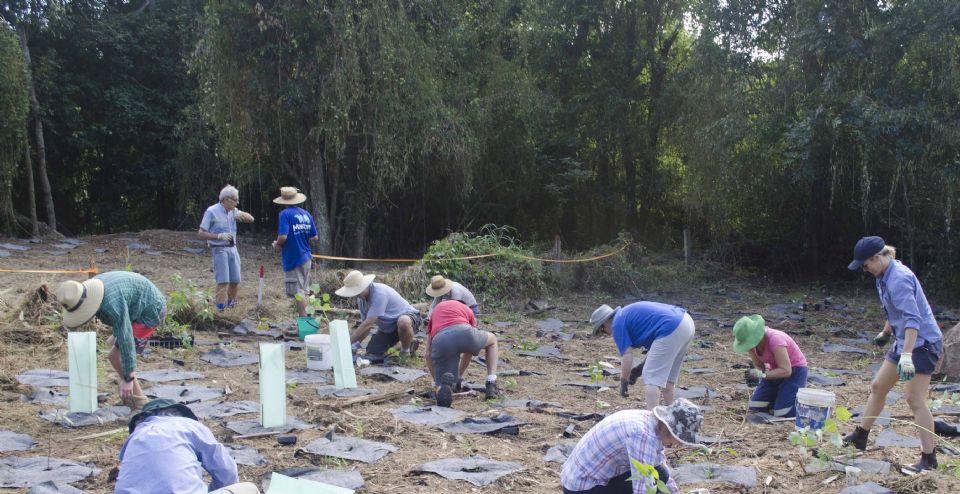 The bushland along Yoorala Street is one of The Gap’s hidden treasures. It’s hard to imagine 20 years ago it was a mess of weeds, rubbish and abandoned vehicles.

In 1996 when Athol Brown began rehabilitating Enoggera Creek at the western end of Yoorala Street, it was a rubbish dump. Builders and residents were dumping concrete, bricks and steel. Dumped garden waste was common. The garden waste became a mass of invading weeds.‘The creek was composed of weeds of all types including large camphor laurels Cinnamomum camphora, ochna Ochna serrulata, fruit trees and jacarandas,’ Athol said.

Between 1996 and 2007 Athol carried out restoration supported by various government programs including two Green Corps teams and Work-for-the-Dole. ‘By far the greatest assistance came from Community Service between 2002 and 2007. Most Saturdays I had between four and six young people carrying out Community Service Orders,’ he said.

Athol and his helpers planted 85,000 native plants between 1996 and 2007 transforming the site from a degraded creek to quality bushland.

In 2007 Athol took a break, then The Gap storm decimated the site. ‘On 16 November 2008 The Gap storm, of an intensity known as a ‘microburst’, struck and devastated virtually the entire Yoorala Street West section. After that I couldn’t face trying to fix the damage. ‘The Council cleared it somewhat over the next couple of years. No restorative activity, however, occurred since the storm apart from a Green Army team during the winter months of 2015,’ he said. 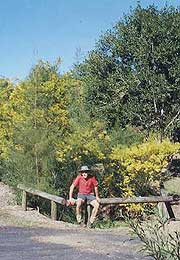 In 2015-16 Athol recommenced restoration activity in one of the sections which was devastated in 2008 by the microburst. With assistance from SOWN and Seqwater, a further 5,000 plants were planted at a community planting in 2016. These are now growing very well and this section is again in good shape.

It is interesting to note, Brisbane’s only substantial tract of surviving rainforest in intact/semi-intact state is in the Enoggera Creek catchment upstream of Enoggera reservoir. This site is an important link to this remnant. 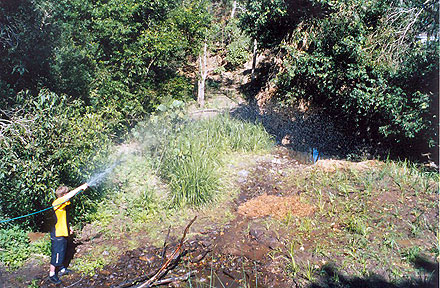 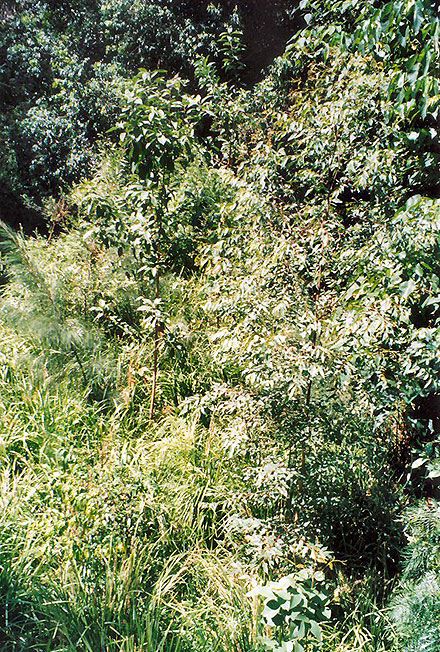 Looking downstream from Fursman Bridge, 2005, 18 months after the picture above. 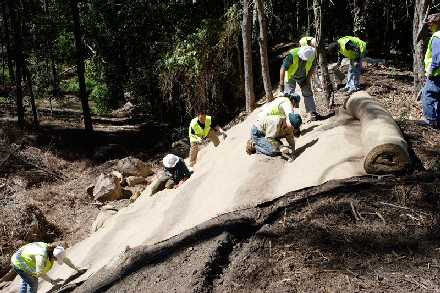 During 2006 SOWN successfully applied for a Federal Government Community Water Grant to restore a weedy wetland along Yoorala Street, The Gap. Click on the link above to read more about the project.

Feature Tree – This magnificent fig tree was discovered by Athol Brown during his restoration – prior to that it was hidden by a thicket of weeds.