Location:
On the northern bank of Enoggera Creek, the Yoorala Street East site runs from Elgata Street, past the Community Garden to the cul-de-sac end of Yoorala Street.

Walking along the creekside track you might imagine you were walking through original bush, but not so. When Brisbane was sewered in the 1960s, Enoggera Creek was bulldozed to lay down sewer lines. This was followed by illegal rubbish dumping and then the weeds took over.

With the formation of SOWN in the 1990s, two retired school teachers Vera and Fred Moffett were recruited as volunteers. ‘We knew the creek needed a cleanup. It was terrible,’ Fred said.

Established in 1995, the group’s original intention was to clear the rubbish and weeds. Then they just kept going, planting thousands of native plants as well as constructing a path along the length of the creek. They worked together with Athol Brown’s adjoining bushcare site and neighbours such as Petra Skoien pitched in.

After 12 years working the site, Vera and Fred retired from bushcare. Vera Moffett died in 2010. There is a creekside seat dedicated to her near the Ashgrove Men’s Shed.

In 2009 Stella Field got involved with bushcare after seeing a sign promoting the Brisbane City Council Habitat Brisbane program. ‘It pulled at my heartstrings. It reminded me how much I love creeks,’ she said. Stella became a SOWN volunteer and was group leader at Yoorala Street East for six years.

Work on the Yoorala Street East bushcare site has been largely a matter of maintaining the restoration done in the previous 20 years.

Renee McGlashan and Ed Benett who also lead the group at Yooralla St West have  taken over as the group coordinators as of the 16th September 2021 and regular working bees be held every Friday morning on the fortnight. 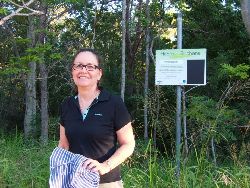