The Wittonga Park Bushcare Group is restoring the headwaters of Fish Creek within Wittonga Park, The Gap. After the big community planting in 2019 to celebrate SOWN’s 25th anniversary, new convenors Natalie and Diane have taken on the group.

The group meets on the third Sunday of the month.

For more information, you can contact Natalie on 0432 944 688 or email  at WittongaParkBushcare@gmail.com.

Since 2000 Kath and Bernie Stockill have been working in Wittonga Park to restore native vegetation along Fish Creek.

One of their biggest early projects was to revegetate an open drain running through the middle of the park. The Brisbane City Council helped with the project, digging out the drain with machinery and then mulching. The group then started planting lomandras in the thousands and lots of trees.

After one planting, there was concern that vandals had pulled out some of the lomandras, but it wasn’t vandals of the two-legged kind. It was the cockatoos and bush turkeys.

One of their great successes was growing native raspberries.

In 2018, Wittonga Park has now mature revegetation along the waterways which the group works to maintain.

The Wittonga Park plantings are designed to create a canopy to starve the weeds of sunlight. The banks along the creeks are mostly steeper than they should be, this is a result of fill being dumped, unnatural erosion, vine growth and other weeds that don’t allow a natural bank formation. Replanting red cedar Toona ciliata, which was harvested even before farming began, is an important step in restoring the natural ecosystem.

Previously it was thought that creeks were not part of parks – now we realise they are the life blood, and must be restored. 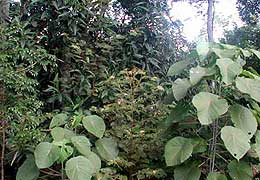 A young canopy with macarangas – a pioneer species.