There are a lot of plants, many of them extremely important, that are in danger of being pulled as weeds because they don’t have the classic “native plant” look, or closely resemble some well known weeds.

Our widely accepted bushcare methods can be harmful in many situations. Poisoning often kills useful plants. Mulching can swamp the smaller and softer native species. Over-weeding can cause death to regenerating native plants by depriving them of cover. Over weeding can also leave bare earth, leading to erosion and moisture loss.

But we have to bear in mind the benefits of bushcare and weigh up these benefits against the possible harm we cause. We can minimise negative outcomes by working strategically and constantly improving our plant and animal knowledge.

Here are just some of the lesser known “False Enemies”.

This little Abutilon is far less aggressive than its weedy cousin Abutilon Grandifolium, but it is never-the-less often mistaken for a weed. Why? Because it is soft, small, and unprepossessing. We had a scare in the Enoggera catchment when we listed Abutilon Grandifolium (wrongly) as an Enoggera species. We were most pleased at its ability to spread quickly, until we discovered it was an exotic pest. 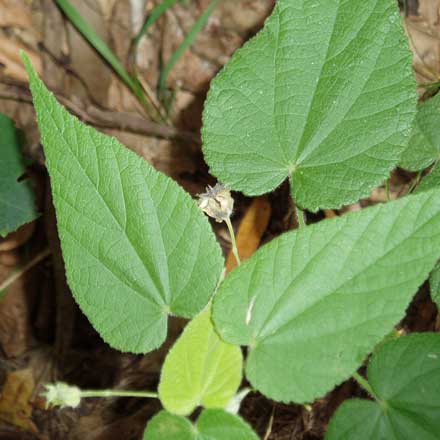 Another small, soft plant that can be mistaken for any number of soft weeds. You’ll see this one appear after rain. The new weed Dischoriste is vaguely similar (but with spikey flowers) and there are some weedy Acalyphas (e.g. Acalypha Australis from Asia). A tricky one. A relative (A. eremorum) with male and female flower spikes (nemorum has the cup/disc female flower), is endangered in NSW. 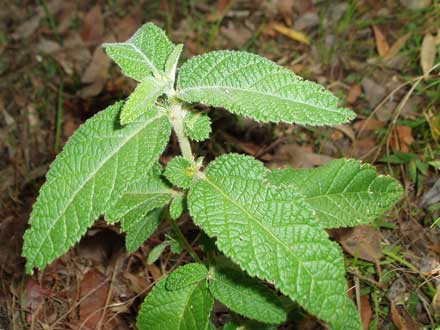 This local native is often pulled out by people removing Balloon Vine (Cardiospermum Grandiflorum). It can appear weedy, as it is a pioneer. It’s excellent at plugging sunny gaps, buit it is not a weed. 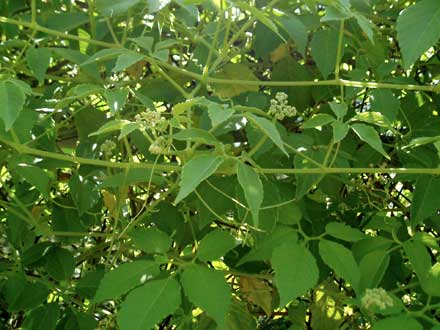 Many people cannot imagine this aggressive climber is a native plant, but it is. Its name refers to the “Vietnamese” Maclura, but it has been here in Australia a very long time. Not as long as other thorny plants such as Carissa Ovata, but long enough to be throughly integrated into the local biology. 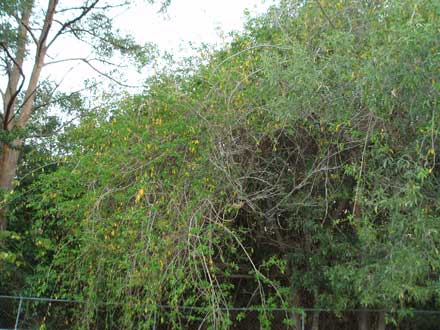 This ubiquitous scrambler is clearly weedy in habit, it invades sunny creek edges that are exposed because of a lack of covering shade trees. In historical terms it is not normal for our Enoggera waterways to let sun onto the creek. The natural state is deep shade produced by a large range of trees including Waterhousea, Black Bean, Hard Quondong, Sandpaper and other Figs, E. microcorys, Neolitsea, Kamalas (red and green), Cryptocaryas, Jagera, Alphitonia, Cheese Trees, Flindersia and so on.

If Commelina is running wild, it’s better to leave it and Smart Weed (Persicaria spp.) than remove it. The strategy is to get the trees established to shade the creek, and the weedy natives like Commelina will disappear. 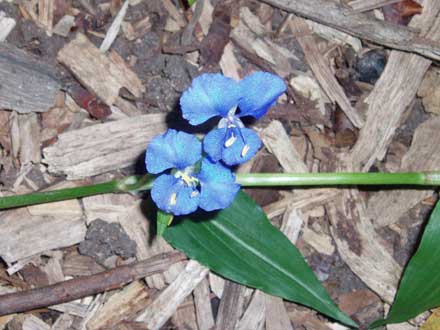 Dutchmans Pipe is a nightmare in dry rainforest. It is the “killer from Brazil”. In this photo you can see the Peal Vine (Sarcopetalum Harveyanum) on the left and Dutchmans Pipe (Aristolochia Elegans) on the right. Pearl Vine, to the untrained eye, could easily be mistaken for the dreaded Brazilian butterfly murderer. 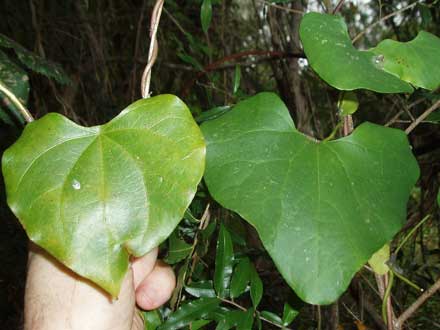 If you encountered this sprawling shrub/climber you could be forgiven for thinking “weed”. This one was a rather shabby specimen, not the least because it was rescued from a thicket of Ochna, Madeira, Thickhead (Crassocephalum Crepidioides) and Dutchmans Pipe. A very useful plant with spade or spear-shaped leaves, fire retarding, with abundant berries all year round, and able to grow on very heavy soils. 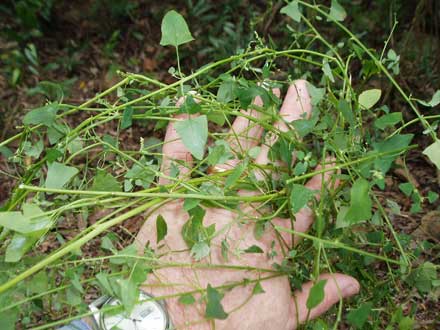 Any number of small grasses and sedges can be trampled, torn, suffocated or burnt by the extra exposure weed removal causes. This “Graceful Ottochloa” can form quite thick drifts if left alone, as can Oplismenus Aemulus (Basket Grass). Who among us can recognize species in these genuses: Alloteropsis, Ancistrachne, Aristida, Austrostipa, Bothriochloa, Chloris, Digitaria, Echinopogon, Eriachne, Heteropogon, Hyparrhenia, Microlaena, Poa, Sporobolus, Stipa? I know I can’t. How many of them have been pulled by mistake? 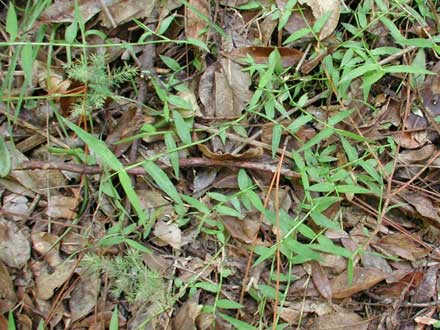 There are many weedy Solanacea but also many native ones like this Kangaroo Apple. Pioneers like this one are useful for the control phase in a reveg because they are very fast growing and have abundant, fertile seed. This brings up a question: “When is a pioneer a weed, even though it may be local?” Probably when its density (as with some stands of Macaranga), prevents the natural generation of species below it. In this case it needs to be thinned. I haven’t seen too much evidence of Kangaroo Apple “getting away from us”. It seems fairly short lived in dry rainforest, as it is a moisture and heat lover. 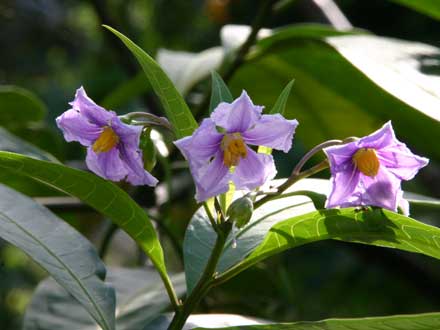 I know for certain that Carex have been pulled by mistake, because this happened to some of the ones I planted myself. It’s easy to confuse with some of those other weedy grasses on the waters edge – but much tougher and with abrasive, cutting edges. Watch out for this one. 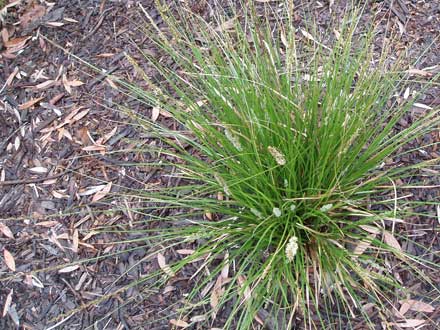 Last but not least this trailing herb is the bane of the herb garden — it intertwines with Oregano and Thyme and makes harvesting very picky. But all Lobelia species listed in Plant Search are Australian, and this one, probably purpurascens, is local to Enoggera catchment. A great plant when you’re looking for a stabilising ground cover. 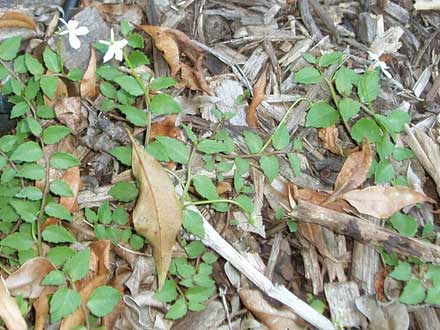 Ipomoea Plebeia [Bell Vine] a native is often mistaken for introduced Ipomoea species, not any one in particular, but in general.