The area between Ashgrove and Newmarket, along Ashgrove Avenue, was originally known as the Three Mile Scrub. Remnant areas of this lowland rainforest remain in the Banks Street Reserve and along Enoggera Creek.

The Three Mile Scrub Habitat Group is a group of local residents focusing on bush regeneration principles, encouraging natural regeneration of the bush, with supplementary plantings of local native species as required.

The regeneration area represents two plant communities – gallery rainforest along the riparian strip and southern bank of Enoggera Creek and open forest on the steeper northern bank. The site is disturbed and very dynamic, and the group is working strategically to slowly manage a large area of elephant grass by gradually shading it out with canopy species. A long stem planting technique is being trialled in an area that receives high velocity water flows. 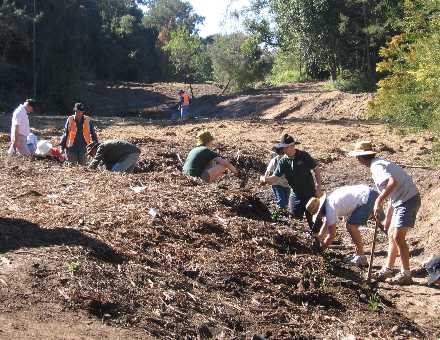 Three Mile Scrub was once an area of lush lowland subtropical rainforest which bordered Enoggera Creek from Banks Street Reserve to Kelvin Grove.

When James Backhouse visited Three-Mile Scrub on 2 April 1836, he said,

Accompanied by the surgeon, two prisoners, and a native Black, we visited a forest called the Three-mile Scrub on a low, alluvial soil, through which there is a small stream. One of these Ficus macrophylla was forty feet in circumference, at the greatest height that I could reach its roots formed wall-like abutments, extend-ing from the tree, over an area, thirty feet across.

In 1857 a group of field naturalists said,
… we were enraptured by the south American luxuriousness of the vegetation. Immense gum trees 200 to 300 feet high, surrounded by gigantic creepers… Interlacing alike all the giants of the forest – the gum, the cedar, the ironbark and the box… The ground is covered with the most elegant creepers…while the intermediate space is filled with the larger kinds of shrubs and bushes, such as our dilettante at home would give almost anything to possess… A most beautiful, peculiar and spirit-stirring effect.

Yet only 30 years later most of the land had been cleared by selectors whose land grants required them to remove the vegetation. Any remnant vegetation was overrun with lantana Lantana camara. Farming soon gave way to suburbia. Enoggera Creek became a dumping ground and a drain.

The 1974 flood made the situation worse with Brisbane City Council bulldozing the creek to remove debris. This only made the weeds worse.

The formation of the Enoggera Creek Association led to a program of revegetation starting in the area in 1987. With the establishment of the Habitat Brisbane program in 1991 and the formation of SOWN in 1994, the movement to revegetate our creeks has continued to grow.

Local volunteers and community organisations work to remove tonnes of weeds and plant thousands of plants in Three Mile Scrub every year.