First of all, Dick, don’t be alarmed.
Sure, it’s been eleven days since I entered the Greater Enoggera Catchment on my quest to find rare exotics … And I do admit I am totally and utterly lost, but don’t worry, I’ll find my way out eventually.
There’s plenty of fresh drinking water in the creeks, and loads of bush tucker, so I won’t starve – but I still don’t seem any closer to finding what I’m looking for.
I know I only have my holidays for my hobby searching for specimens for my collection, but since that’s 26 weeks every year, you’d think I would have found something by now.
I admit, I’m a bit discouraged.
I got a hot tip that someone had seen the rare Madeira Vine in this catchment. What a joke. I haven’t seen any evidence at all, not a leaf, stem or tuber. I’ll be having words with my source when I get back. 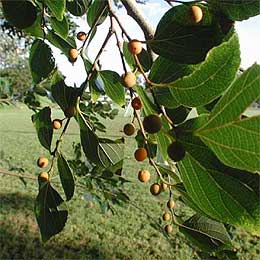 Historical photo of Chinese Elm from the archives. What a treat to find one!

As for Balloon Vine and Cats-claw – I’ve given up even looking for them, after what happened this morning.
I had climbed 50 metres to the top of a Blue Quandong to try to see a landmark to help me find my way (hopeless – the canopy just stretched forever on all directions) and while I was being laughed at by parrots and rosellas in the canopy I thought I saw some of the yellow Cats-claw flowers in the distance.
I climbed down and set off through thick scrub full of Satin Ash, Tuckeroo, Tulipwood, Weeping Myrtle, Davidson Plum – hard going I can tell you – only to find those yellow flowers – when I found them – were Native Frangipanni.
What a disappointment! I had really built my hopes up – I actually thought I had found the elusive Cats-claw creeper!

I have to admit, I was heartbroken. I had a little cry, as I snacked on some Native Guava for morning tea.
Eventually, I brightened up – where there’s life there’s hope – and in the cool rainforest, watching the platypus playing in the creek – well you can’t stay sad for long.
Imagine me finding Cats-claw! After all, if I’d had no luck finding so called hardy exotics like Ochna, Lantana, Privet or Mulberry what hope did I have for Cats-claw – it’s so much rarer.
It would be like finding Singapore Daisy, Morning Glory, Asparagus Vine, or Mother of Millions. Fat chance! Dream on, Roberteus!
Of course I didn’t even bother trying to look for such impossibly rare plants as Castor Oil or Devil’s Fig – which disappeared from this region over 900 years ago.
My best hope was to find some big ones like Camphor Laurel… and of course my number one target – the Chinese Elm. Surely I could find a Chinese Elm, a species recorded in this catchment less than 250 years ago.
If only I’d been around a thousand years ago! Apparently, exotics (no longer found round here) like Japanese sunflower and African tulip – were quite common.
Oh well, I had better keep going. You never know, I might get lucky and see something really rare, like Black-eyed Suzy or Green Cestrum. Now that would be something.
You have no idea how much I envy your trips overseas where you can see these species in their native countries – as you know, my world visa was taken off me after I was caught smuggling in Senegal Tea for my water feature.
But if that hadn’t happened, perhaps I wouldn’t ever been inspired to take up this hobby of searching for these rare exotic species in this beautiful Enoggera rainforest.
Wait a minute… is that a Cocos Palm I see up ahead?
TRANSMISSION ENDS 4.44 pm EGT