The Future of Walton Bridge Reserve

← How much fun can you have on a Saturday morning? Art Meets Creeks →

Anne Jones reports on the current state of play

A straw poll of the locals who use Walton Bridge Reserve indicates they love the park as it is now and don’t see the need for any change.

At the meeting Cr Toomey distributed forms to gather feedback about what people want in Walton Bridge Reserve. These forms will go to Council staff who will formulate a plan.

The Brisbane City Council process is separate to The Gap Residents’ Association masterplan which has now been revised after feedback from SOWN and the Walton Bridge Bushcare group. The Gap Residents’ Association has agreed to amend their first draft of the masterplan scrapping the proposed new carpark, scrapping any infrastructure in the flood zone and preserving all native vegetation.

Now there are two groups busily making plans for Walton Bridge Reserve with the locals not very happy about either process. In fact, residents in Lochinvar Lane have started a petition and are canvassing for signatures.

As one regular park user put it, “Why don’t they just leave us alone?” 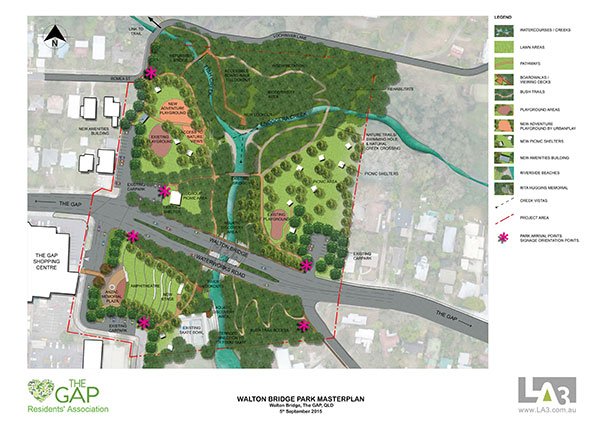