Spider named in honour of SOWN 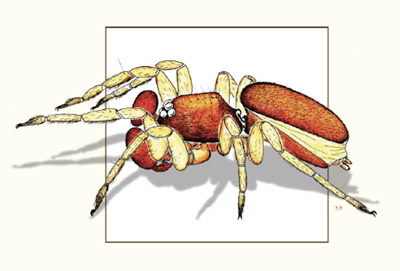 A small goblin spider has been named in honour of Save Our Waterways Now.

“Having a spider named in honour of SOWN seemed like an appropriate way to commemorate what we do. The name of SOWN will live on in the scientific literature,” Anne said.

The Certificate of Authenticity says:

“The specific name is a patronym in honour of Save Our Waterways Now Inc (also known as SOWN) a community organisation working to restore the habitats of creeks and waterways in the catchments of Enoggera, Ithaca and Fish Creeks in Brisbane’s north and west.

“This tiny Goblin Spider, 1.15mm long in males and 1.12mm in females, belongs to the most diverse ground spiders of Australia. They can easily be recognised by their six eyes and their dark red-brown scutae. The genus Opopaea has a club-shaped palpal patella and a cymbium fused to the bulb in , which is unique for this genus.

“They live in leaf litter of the Rainforest at the eastern part of Queensland.”