Something to BRAG about 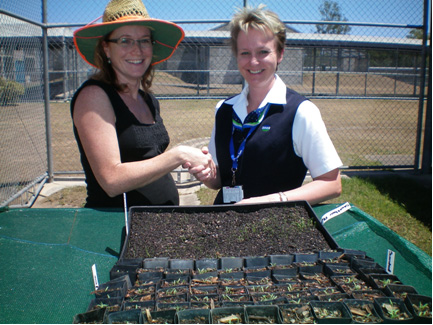 Bush Regeneration at Arthur Gorrie or BRAG is a new partnership that’s providing SOWN with plants for our bushcare sites.

In 2009 Brisbane City Council formed a partnership with Arthur Gorrie Correctional Centre (AGCC) for a one-year trial program of growing native plants for use by southside Habitat Brisbane groups.

Privately administered by The GEO Group Australia under contract to Queensland Corrective Services, AGCC offers behaviour management programs and training in literacy, numeracy, vocational and other skills for inmates. The facility aims to be environmentally responsible.

Finance and Administration Manager Lisa Boase said AGCC tries to provide meaningful activities during out of cell time that stimulate and engage the prisoner population in a positive way.

“Preserving the environment for our generations to come is important to everyone no matter what their circumstances may be,” Lisa said.

The initial focus was on growing a range of locally-native grasses, which are often not readily available.

Moving to Habitat Brisbane West in late 2010, Melinda McLean has continued her involvement with the program and invited SOWN to join the partnership.

So far the partnership has contributed over 5,600 native tube stock sized plants back into the Habitat Brisbane program for distribution amongst the groups across the region.