Keep an eye out for these nasties

Keep an eye out for these sneaky weeds around your local patch. Several of these species have have already infiltrated Enoggera and Ithaca Creeks in recent months.

Although we are blessed to live in Brisbane with its mild climate and bio-diverse natural areas, these climatic conditions favour many introduced plant species that can quickly become weeds and spread throughout natural areas.

If you find any of these weeds, please report them to your local Catchment Coordinator or Habitat Brisbane Officer through the Council call centre or use the link below.

Melinda Mclean (Enoggera Catchment Coordinator) – Email Melinda if you suspect you have any of these weeds in your local patch.

Dyschoriste (pronounced Diss-kor-iss-tee), is the latest weed invading the riparian zones of the Enoggera Creek Catchment.

It is a small, herbaceous plant to 30cm tall and is a member of the Acanthaceae family.

Dyschoriste hails from the floodplains of Southern Africa. In its natural environment it occurs in a range of areas including along riverbanks and on the edges of floodplains. It is tolerant to a wide range of climatic conditions, including droughts and flooding rains common in its homeland, where it is thought to play a role in stabilising waterway banks.

It has used its adaptability to full advantage in Brisbane, where it has inhabits both dry mown parklands and moist riparian areas.

Dyschoriste was first reported in Brisbane in 2001 at Ferny Grove and has rapidly spread throughout the Kedron Brook Catchment. The weed is thought to have spread via Council mowing contractors who unwittingly transport fragments of the weed from park to park, where it moves into adjacent creeks. 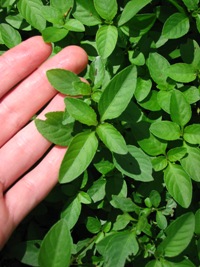 D.depressa quickly forms mats in areas where it infests.

Dyschoriste can be identified by the opposite leaves with entire margins and ovate (egg shaped) leaf blade.

The flowers are purple or pale lilac, tubular in shape and are found in the leaf axils. Both the flower buds and seed pods feel quite spiky to touch, which is an easy way to identify the plant.

Dyschoriste occurs in two forms – the mown form which is prostrate and spreads by rooting at the nodes, and the upright form which is usually found in creek corridors and other non-mown areas.

Keeping an eye out for Dyschoriste 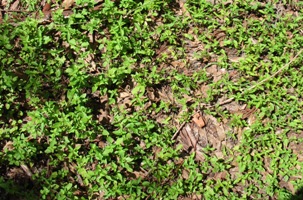 The mown form of D.depressa, lacking the obvious flower buds.

Dyschoriste has been recorded in two locations within upper Enoggera Creek and Ithaca Creek. It has the potential for much greater distribution.

Brisbane City Council has initiated an eradication program for Dyschoriste Depressa. This comprises:

Catchment group members can help out with this eradication program by reporting new (or suspected) infestations of Dyschoriste to their catchment coordinator. 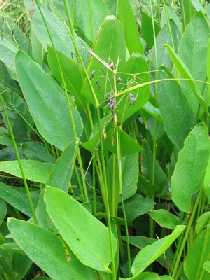 Since it was first found growing in a drain in Toowong last year, this plant has popped up in several new locations around Brisbane, including in Ithaca Creek and Enoggera Creek.

Thalia is an aquatic, upright, emergent perennial with 1m long arrow shaped leaves on thin stems. It forms dense clumps to 3m tall and has the potential to become another environmental weed that will choke waterways and exclude habitat for native fauna.

Thalia can be easily identified by its attractive purple and white flowers, that are borne on ‘zigzagged’ stalks at the top of the stems.

It flowers and fruits through summer and autumn and can spread through vegetative clumping and seed dispersal along waterways.

If you find Thalia in your waterway, report it to local Council. It can be treated effectively by cutting and painting with Roundup Biactive, which is resistered for use in a waterway. 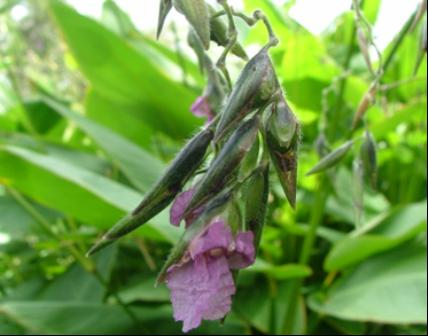 Brilliantasia is an invasive weed in tropical Australia. If was thought that the sub-tropical climate of Brisbane was out of this plants preferred range until several infestations were discovered in the Toowong/ Mt Coot-tha area.

The plant is orignally from Central and West Africa. It is a coarse, branched herb, between 20cm and 2m tall. It has opposite, heart shaped leaves and stems that are hairy and square. The flowers are a bright blue to purple and the seed pods are long and cigar shaped. Brilliantasia reproduces by both seeds dispersal and rooting from stem fragments. 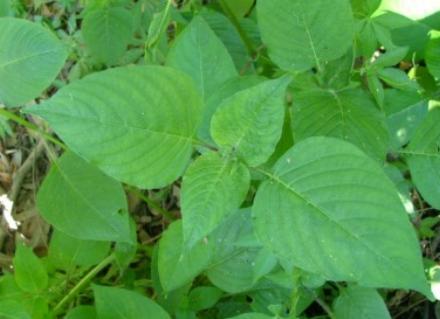 Brilliantasia likes to grow in moist areas full sun of part shade. It can form dense thickets that can crowd out native vegetation and reduce food sources for wildlife.

It can spread quickly through riparian and disturbed areas. 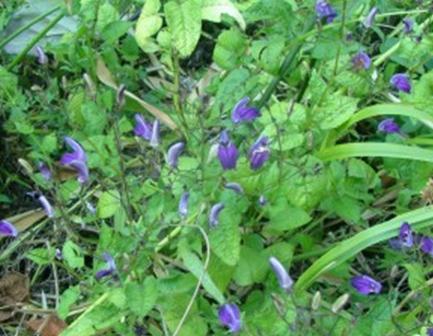 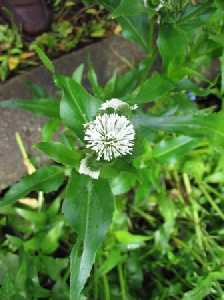 Senegal Tea is a highly invasive aquatic weed. It is listed as a Class 1 weed under State legislation and is included on the Federal alert list for environmental weeds – a list of 28 non-native plants that threaten biodiversity and cause other environmental damage.

Senegal tea can quickly take over slow moving waterways and wetlands, where it forms clumps up to 1m tall. It has been located in Ithaca Creek on several occasions and has been treated. Vigilance is required to continue to monitor and treat current infestations.

What to do if you find Senegal Tea 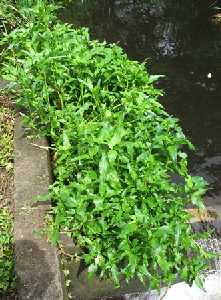 Senegal Tea is a fast spreading plant that reproduces through both seed production and vegetatively through stem fragmentation at the nodes.

It is a broad leaf emergent which can be identified by its glossy, dark green leaves which are opposite and spear shaped with serrate margins. The stems are hollow which gives the plant added buoyancy and are a good identification feature.

The flowers are white and ball shaped occuring at the end of the stem.

If you find Senegal Tea, report it immediately to your local council. Class 1 pest plants are serious weeds, but are not generally established in Queensland – thus there is a need to eradicate them quickly when they are found.