This site was a labour of love for local resident Saba Burns from 2003 to 2019. Recently a new neighbour Mel Isaacs has taken up where Saba left off and will continue her amazing work.

The site has been extensively cleared of weeds and regenerated to locally native habitat. The group maintains the riparian area around the corner of Cecil Road and Coopers Camp Road, Bardon.

For more information, please contact Mel Isaacs on 0419 149 800, at zax.mel@gmail.com, or you can find the group on facebook at https://www.facebook.com/sabascornerbardon/.

For Saba Burns it all started in 2003 with the lady next door lamenting how lovely the creek bank used to be when she could see across Ithaca Creek to the lawn tennis courts on the other side.

Saba offered to go and tidy it up. Then it just became bigger and bigger. She started pulling out weeds and rubbish and making a big pile on the side of Cecil Road. The neighbour called Brisbane City Council to remove the rubbish pile but they only bought a ute. They returned with a tip truck and bobcat to load. Soon after, a gentleman from Habitat Brisbane suggested that Saba join SOWN, if she was interested in volunteering.

The creek bank was so steep, Saba had to tie a rope around her waist to save her in case she slipped. Gradually she’s removed all the weeds and replanted with native species provided by both Brisbane City Council and SOWN nursery. Saba said she was always keen to plant a wide diversity of plants.

Over the years, Saba has pretty much done everything on her own. She’s had a some assistance from Council removing large weed trees, SOWN members Robert Whyte and John Marnane helped with clearing and a grant paid for the removal of the cane grass on Coopers Camp Road. Saba just kept planting. In fact, she says planting has helped to stabilise a very steep section of bank that was in danger of collapsing.

Now she has crossed over to the far side of the creek to work there as well as working to maintain her original plantings.

She loves to hear stories about Ithaca Creek in the old days – how it was mostly dairy farms and how a circus used to come to the area every year.

Saba’s work has been recognised with several awards. 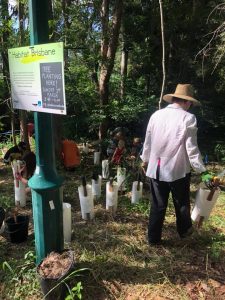