Stems are green with brown to reddish highlights at the nodes. Leaves are strongly and obviously veined on both surfaces. Flowers are a tubular construction with soft lobes and a long throat clasped at the base by sepals. Fruits are green “cigars” sheathed by sepals at the base and with a rounded point at the tip. The sepals are somewhat hairy. 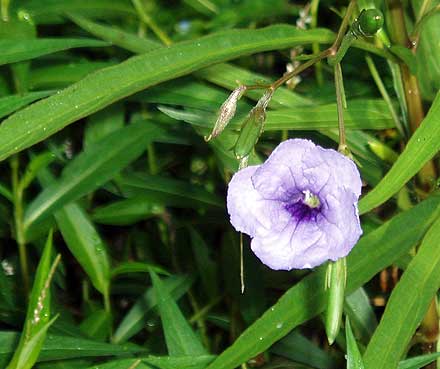 Flowers can be a whitish blue-mauve to a deeper indigo.

Ruellia provides useful frog habitat, but becomes a monoculture and prevents the natural growth of Cinnamon Myrtle, Cheese Tree, Waterhousea, Carex, Callistemons and other creek edge plants. It seems to invade in sunny areas, but does well in shade unlike some more threatening weeds like Wild Taro. Ruellia does not seem to pollute the water as much as Taro.

It is very arduous to remove, being tenacious in rocky areas, and as it grows on the water’s edge, hard to get at and inadvisable to spray. Removal may promote regrowth from root fragments and seeds of itself and other species such as Billy Goat Weed and Cat’s Claw. It is one weed where mosaic weeding is absolutely essential, if it has taken over where frogs are living, complete removal would destroy crucial habitat. Stoney Creek Frogs Litoria wilcoxii will quite commonly jump out when you are removing clumps of Ruellia. 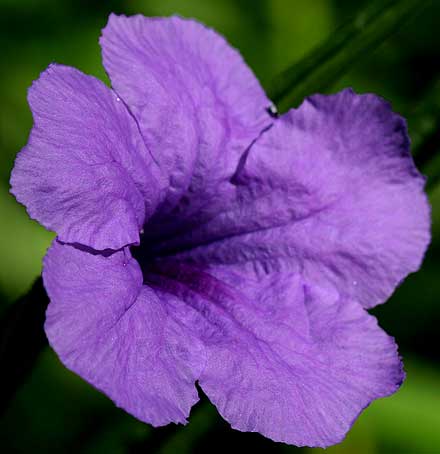 Dr. Sheldon Navie (Education Research Officer, CRC for Australian Weed Management) writes: “Ruellia tweediana is not native – this is an error that is present in the “Global Compendium of Weeds” book and web site. No Ruellia species are currently regarded as native to Australia (though Ruellia tuberosa sometimes used to be).” 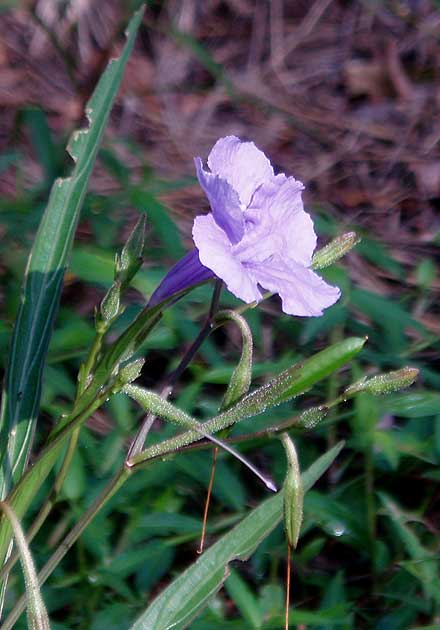