In July 1996, Athol Brown began the major task of restoring a large section of Enoggera Creek running parallel to Yoorala Street (West). Beginning at Jirrima St, Athol worked his way upstream past Yanina, Kilsby and Cobble St all the way through to Warana St. In addition to this, 4 extra sites located further afield were added to the project – these can be seen below in Figure 1. This effort became known as the Enoggera Creek Restoration Project and continued through to July 2007. 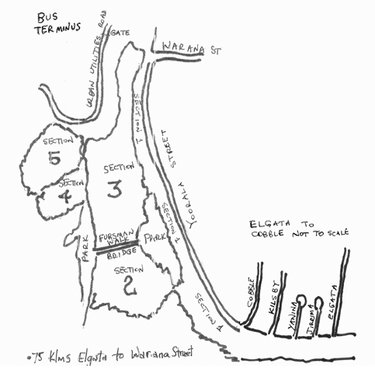 Prior to restoration, the area was in very poor condition. In 1971, a large section of the creek was detonated by the Council Administration in order to lay sewerage lines. This irrevocably damaged the creek and destroyed many magnificent rounded boulders that had taken thousands of years to form – a grave and sad event in environmental history. During the following years it continued to be severely damaged by builders and residents with the dumping of a great variety of hard rubbish including concrete, bricks and steel. The dumping of garden waste was also commonplace over prior decades which lead to the emergence of weeds of all types including large camphor laurels, ochna, fruit trees and jacarandas to name just a few. With the efforts of Athols’ Enoggera Creek Restoration Project, the Yoorala stretch is now completely free of camphor laurels.

Between 1996 and 2007 the majority of restoration was carried out by Athol himself and the help of various government programs including two ‘Green Corps’ teams and ‘Work-for-the-Dole’ volunteers. The greatest assistance however, came from ‘Community Service’ which involved four to six young people carrying out Community Service Orders every Saturday. With the help of such volunteers, Athol planted an impressive total of 85,000 plants over the duration of the project. Working an average of 25 hours per week as well as attending committee meetings and carrying out many other subsidiary activities, Athol dedicated an extraordinary 15,000 hours of his life to the restoring on the creek over the 11 year period. Community Service provided approximately 5,000 hours. As a result of this combined effort, along with intense follow-up maintenance including:
a) Continual weeding until the canopy formed,
b) access to reticulated water and
c) plenty of supplies of mulch from both the Council and from a local tree-felling contractor;
the project was a huge success up until 2008.

On the 16th November 2008, a devastating storm struck The Gap with the intensity termed as a ‘microburst’. Tearing its way through the area it destroyed virtually the entire project site. After seeing years of hard work go down the drain, Athol couldn’t face trying to fix the damage. The Council cleared the area over and no restorative activity commenced until August 2015 when the Green Army team stepped in.

Athol looks back on his time working on the Enoggera Creek Project with fond memories – every day was an adventure in itself. His only regret is letting it lapse after the microburst. In the future, Athol hopes to see sections 2, 3, 4 and 5 (seen in Figure 1) brought back to the high quality restorative condition that had been achieved in 2007 (most of section 1 is in a reasonable condition). He believes that with the help of community volunteers and Government initiatives, such as The Green Army, it would only take a fraction of the work originally carried out to reach this very attainable goal. 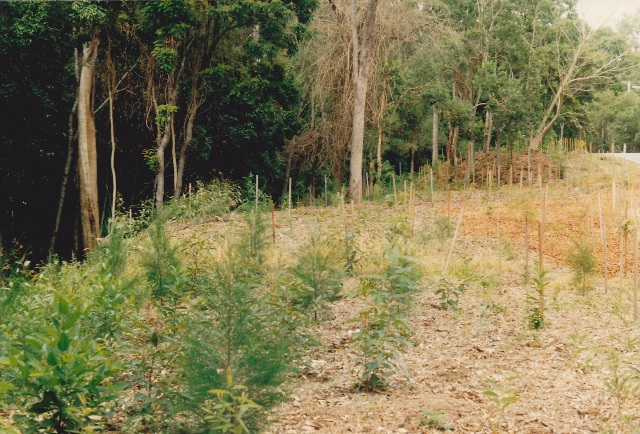 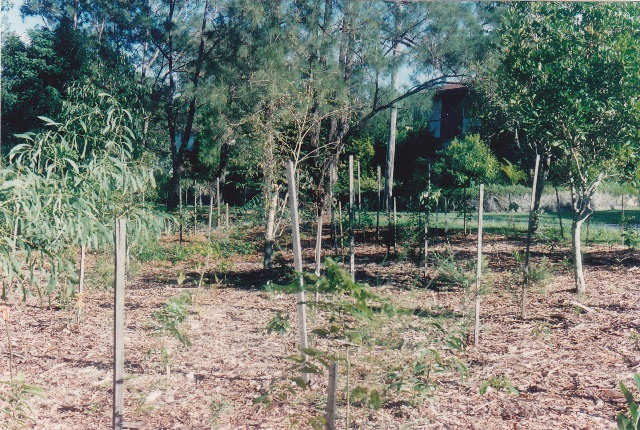 New plantings in 1997 – below Jirrima St