← Pultenaea euchila (FABACEAE) Pultenaea Pteridium esculentum (DENNSTAEDTIACEAE) Common Bracken →
This is one of the ferns (others include Nephrolepis spp and even possibly Christella dentata) that are of uncertain origin in Australia. It is likely that P. vittata is native to some areas, but has almost certainly been introduced (from native or foreign specimens) in other areas. The oldest Queensland collection is dated at 1909. If native, it is likely it was rare in Australia prior to white settlement, possible limited to areas of natural lime. Flora of Australia volume 48 does not record it as introduced, but the treatment of Pteris was taken over by the editor of the volume following the death of Prof. Karl Kramer of Zurich, at a stage when the manuscript was probably quite incomplete, so the Pteris information can be probably considered quite sketchy. Given that P. vittata is a lime lover, and found along mortar lines in walls etc, and that these habitats only existed with white settlement, it is most likely that city populations are mostly introduced. (Thanks to Peter Bostock, Queensland Herbarium).

This plant is listed as rare and endangered in New South Wales. 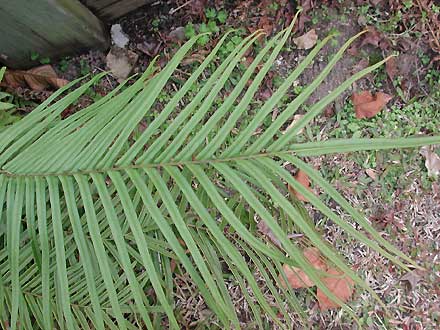