← Plectranthus graveolens (LAMIACEAE) Native Coleus Platycerium bifurcatum (POLYPODIACEAE) Elkhorn fern →
Platycerium is a genus of about 18 species of ferns, four of which occur in eastern Australia. Two, the elkhorn (P. bifurcatum) and the staghorn (P. superbum) are well-known in cultivation.

Staghorns are generally epiphytic (growing on trees), or occasionally lithophytic (growing on rocks). They are homes to a wide variety of animals Including springtails, insect larvae and caterpillars, book-lice, thrips, mites, beetles, bugs and wasps. Animals help break down the forest litter which collects in the open shape at the top – providing nutrient to the plant.

These ferns have broad nest fronds to 60 cm diameter, which form a humus-collecting bowl up to 1 metre across. The laminae (leaf blades) of these fronds are erect and simple with deeply lobed upper margins. Fertile fronds are broad at the base and hang down from the plant, with forked laminae (leaf blades) up to 200 cm in length and 2-6 cm wide. Brown sori, which contain spores, occur on the underside of the fertile fronds. 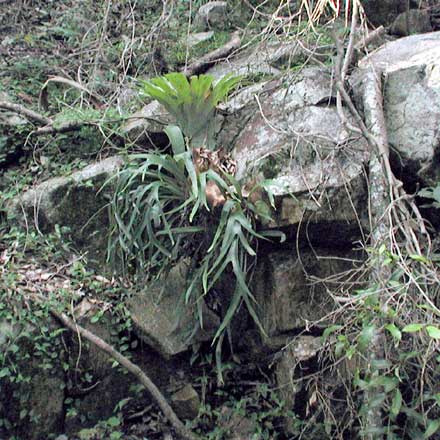