← Sneaky Weeds Something to BRAG about →
SOWN, BRAIN and the local community planted more than 1500 rainforest trees, shrubs and grasses in Glenella Parklands, The Gap on 26 March.

Glenella Parklands was once farm land that was reclaimed as riparian bushland by Brisbane City Council and gazetted as a park. It’s about 40 metres wide and 400 metres long.

Early in 2010 SOWN’s Robert Whyte and his team of volunteers at Walton Bridge Bushcare Group starting clearing weeds along an old path from the Lochinvar Lane end. It took the best part of a year before they broke through to Glenella Street.

They found lots of weeds but also important rainforest trees, vines and shrubs. So Rob asked BRAIN to take a assess the area and assist with replanting.

“We needed a bit of BRAIN power to help with the project. BRAIN organised botanical surveys and we involved the community in planning the replanting project,” Rob said.

He said one of the major trees, a Rough-Leaved Elm Aphananthe philippinensis is so old, it may predate white settlement. It’s a healthy specimen and may live another 200 years.

The community planting on Saturday 26 March was the first of several planned for 2011.

SOWN and BRAIN hope the site will eventually be rehabilitated to a riparian rainforest walk, right in the heart of The Gap.

Rob Whyte said it’s not your standard park with mown grass and a playground.

“We hope that Glenella Parklands will eventually be a park where we can glimpse the type of rainforest that once fringed our local creek,” he said.

The next planting at Glenella Parklands will be held at 9am on Saturday 28 May meeting at the eastern end of Glenella Street, The Gap 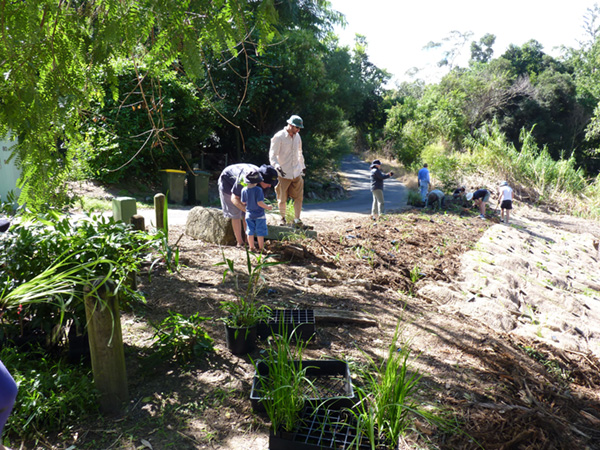