← Ochna serrulata (OCHNACEAE) Ochna Neonotonia wightii (FABACEAE) Glycine →
There is a native form of this fern, but it is not the one you see growing aggressively almost everywhere. Although notionally same species, the Australian one is not invasive like the introduced Nephrolepis cordifolia thought to be a sub-species have been imported from Asia.

This fern is usually found on poor soils on the margins of most Enoggera habitats, especially in disturbed areas. It is spread by the dumping of garden waste, and colonises areas by means of runners and tubers.

It can also grow as an epiphyte on palm trees.

Dull green, to light green or bleached fronds are erect or drooping up to 1 metre (usually half that). The fronds are divided into alternately arranged leaflets. The margins of the pinnae (leaflets) are scalloped.

The fruiting structures are brown, kidney-shaped spots on the undersides of the leaflets. These are the sori, which produce spores. The kidney shaped structure which protects the spores is known as an indusium. The sori are usually midway between the margin and the midrib.

The runners are brownish due to glossy scales. The tubers are roughly spherical. 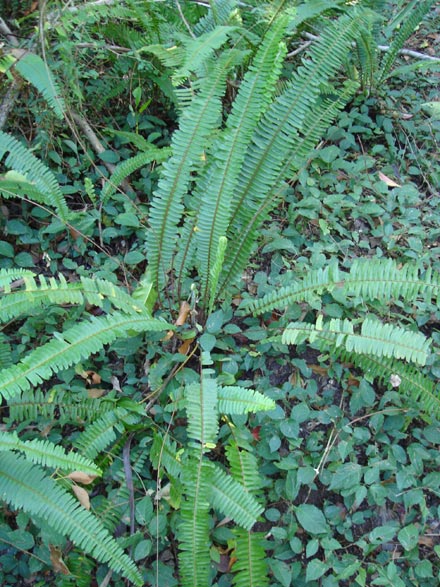