← Neonotonia wightii (FABACEAE) Glycine Morus alba (MORACEAE) Mulberry →
Mock Orange is an emerging weed in the Enoggera catchment, threatening to become “the new Ochna”. It is still widely used by landscapers and gardeners as a screening or hedging plant, despite its threat to local bushland. It is also suspected of causing allergic rhinitus (hayfever).

It is reported in some places as a native of Australia, but it is in fact a native of India and Malesia to New Caledonia. Some forms may be found growing natively in the tropics, but not the forms in gardens (and escaping from them).

It is a bushy shrub to small tree to four metres, with shiny, glossy, hairless leaves. Sometimes young branches and petioles may have a few tiny hairs. Infloresences occur at the ends of branches or thereabouts in cymes of up to eight flowers. Flowers have white petals, greenish white when buds. The fruit is a bright-red, shiny egg-shaped berry about 1 cm long. 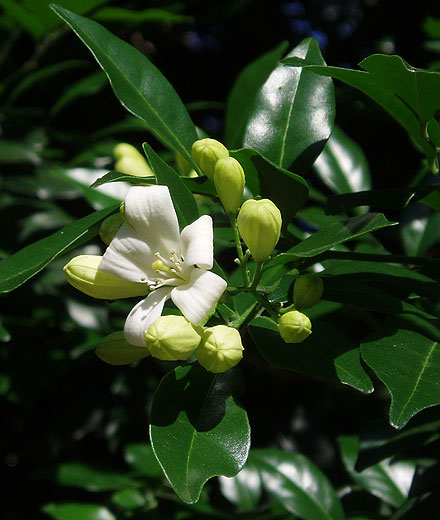 Compound leaves with leaflets ovate to narrowly elliptic, with an abruptly pointed tip. The base cuneate. The margins usually entire but may be faintly crenate.

Not as much a threat in colder regions. First recorded naturalised in Sandgate in1963 (www.weeds.org.au). Seeds are dispersed by birds, its trajectory no doubt increasing due to the increase of larger fruigivorous or omnivorous birds more likely feed on this type of plant. The weedy mock orange is called Murraya paniculata. ‘Exotica’ – to differentiate it from the north Queensland native. 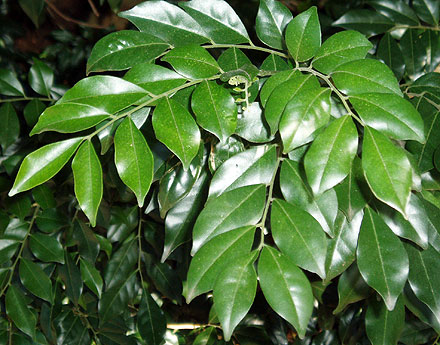