On the hunt for a chicken dinner!

This 2.8m python was spotted recently in a SOWN member’s backyard in Payne Rd, The Gap.

Luckily the chicken coop was closed up in the nick of time. 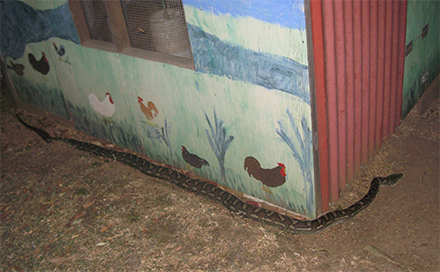 Patsy the bush python and friends

Bush Pythons (better known to older folks as Carpet Snakes) have heat-sensitive pits on their bottom jaw let them sense and track other animals smaller animals such as rats, possums and birds, usually after dark.

They are large, non-venemous snakes to 4m (though most don’t exceed 2.5m) throughout Australia except Tasmania. They can live more than 20 years in the natural environment.

They are named for their markings, which resemble carpet patterns of blotches, cross bands, stripes, or a combination of these. .

They mostly live well camouflaged among leaf litter in tree hollows, logs and rocky crevices. They have come to favour roof spaces and perform an important role in keeping vermin under control (rats especially).

Many people are instinctively afraid of snakes and want to remove Pythons they find on their property. They can inflict a savage bite with tearing teeth, but only when provoked. It’s generally best to leave them alone and in particular if you disturb them, do not get between them and their means of escape.

Dogs and cats are both a danger and a possible meal. In some areas where large pythons have been resident for a decade or more, there have been many reports of small dogs going missing. The Python may well be a reasonable suspect. In other cases feral dogs have been known to harass and kill Pythons living in urband bushland. 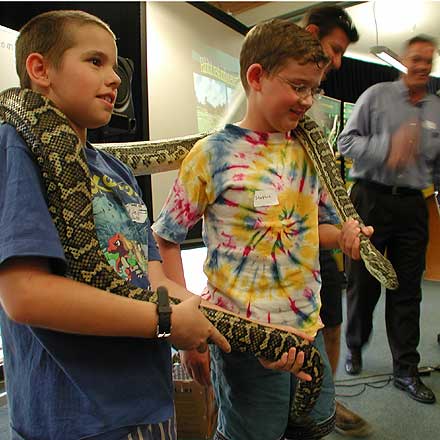 Most forms have intricate markings made up of light and dark bands on a background of gray or a version of brown. All have triangular heads with a conspicuous row of heat pits in the scales around the mouth, as shown in this photo.

“In the Australian python Morelia spilotes, these pits are innervated by the maxillary and mandibular branches of the trigeminal nerve. Structural and neurophysiological evidence indicate that in the pits there are receptors that function as detectors of radiant heat flux.” – Infrared Receptors in the Facial Pits of the Australian Python Morelia spilotes James W. Warren and Uwe Proske, Science 26 January 1968 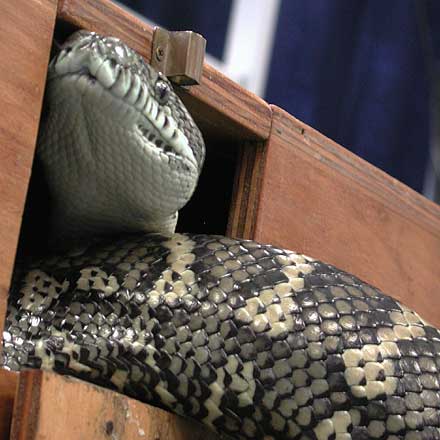 This 4m python was travelling upstream during a rainstorm. The crows took objection and one came down and flapped about, pecking at the snake which took no notice. It took shelter in some mulch which had piled up under the bridge at Smith’s crossing. It reacted to the camera flash by setting itself to attack, it stayed in this posture for some time then disappeared into the mulch, under branches, in the water. 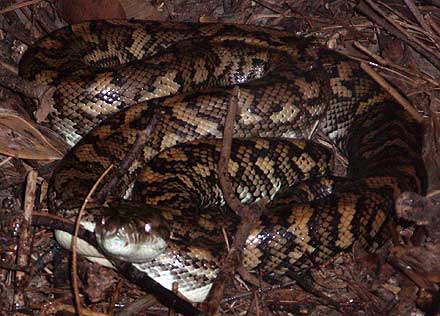 This Carpet Python was sunning itself by the side of Mt Glorious Road alongside the South Pine River where it is a steeply falling creek inside Brisbane Forest Park, on the way to Mount Glorious. Notice the tongue. It was on a “nest” of debris and soon after this photo taken slithered away inside it.

Though cold-blooded like all snakes, female can raise their body temperature by twitching muscles, creating enough warmth to incubate eggs.

Sometimes females will defend their nest if they are guarding a clutch of eggs. Nests in our area have been found under piles of woody weeds and other mulch heaped up by bush care activities.

Interestingly, Pythons (the Pythonidae) have vestigial pelvic girdles and hind limbs that show up externally as a pair of “spurs” near the base of the tail. Males use these spurs during courtship and mating. 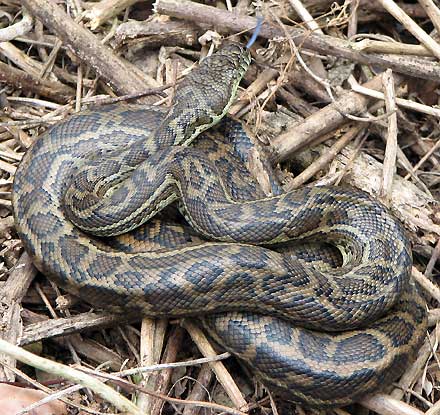