← Megathyrsus maximus var. maximus (POACEAE) Green panic, Guinea grass Manihot grahamii (EUPHORBIACEAE) Ornamental Tapioca →
Medicago is a genus of about 50 species of annual and perennial herbs from Europe and Asia. Many species are cultivated as pasture legumes and several are naturalised. Widespread, weed risk low. Already present, but not too damaging. Burr medic has naturalised over some 2 million hectares of southen Queensland.

Burr Medic is a yellow-flowered, usually hairless annual herb with stems up to 60 cm long. Compound leaves are alternately arranged, clover-like, having three leaflets with slightly serrated margins. Petioles about 3 cm long. Clusters of two to seven flowers are borne in winter and spring on stalks usually less than 10mm long. The greenish-brown pod is a disc-like or cylindrical burr, 2-12 mm long and up to 8 mm in diameter, made up of one to six coils. The burrs are usually densely spined, but some varieties lack spines. Widely naturalised in many situations including lawns. 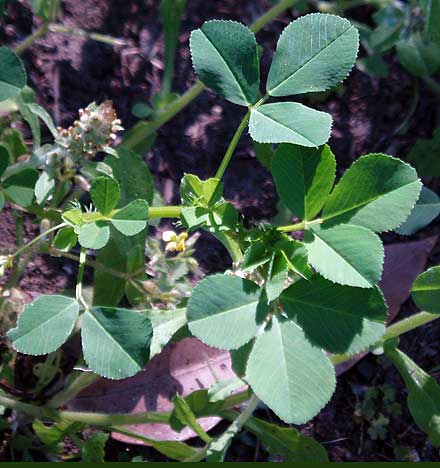