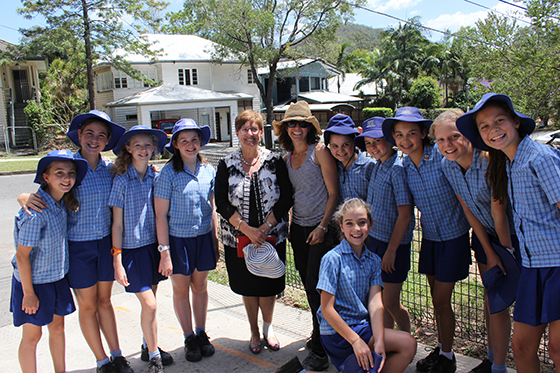 On October 8th, students from Mater Dei School celebrated Arbor Day by spending the morning planting native grasses and wattles in the gully along Orchard Road.

The event was part of the first stage of the new Orchard Road Rejuvenation project, which is being undertaken by Mater Dei in partnership with Brisbane City Council and local bushcare group Save Our Waterways Now (SOWN).

The project site connects to areas previously rejuvenated along Orchard Road (Mater Dei 2009 Rejuvenation) and follows a program of weed removal and site preparation, which occurred during winter.

They planted about 50 native plants, including Lomandra hystrix (Green Matrush) and a number of small trees, including Acacia fimbriata (Brisbane Wattle) and Acacia Maidenii (Maiden’s Wattle).

The rejuvenation project aims to improve the overall water quality of Enoggera Creek by helping to control erosion. It will also increase habitat for native fauna, such as lizards, frogs and birds.

Mater Dei parent Ms Nicole Quinn has been working closely with members of SOWN and Council officers to ensure the project’s success.

“It was recommended by SOWN to only proceed with a small-scale planting on Arbor Day because of the very dry conditions and warm weather. So, we decided to hold off on the balance of planting until the wet season.”

“The gully along Orchard Road looks great with its new rocks, jute and mulch. And now that the planting has started you can really see the improvement to the back entry of our school grounds.”

Ms Quinn says that the project would not have been possible without the involvement of Councillor Knapp who has enabled ongoing remediation of the gully with the generous support of the Lord Mayor’s Sustainability and Environment Fund.

Students and members of the Mater Dei community will maintain the site throughout the final term of 2013 and Christmas period. Plans are afoot for the Year 7 class of 2014 to add another 320 plants to the site in the first week of term one.

Arbor Day celebrates our beautiful trees and the shade they provide. It is traditionally celebrated each year in southern Queensland on the second Tuesday in October because typically this is the best time of year to plant trees in our region.
Click on Brisbane City Council Arbor Day to find out more about Council’s Arbor Day activities for schools.