The Lugg Street Habitat Group was started in 2018, continuing the work done on the site in previous years along a section of Ithaca Creek in Red Hill. The focus is the removal of invasive and exotic vegetation species and their subsequent replacement with native and endemic species. The goal is to improve the local vegetation mosaic to provide further foraging, nesting, shelter and roosting sites for local fauna. It will also improve the resilience of the creek bank through erosion prevention and further enhancing the riparian corridor. 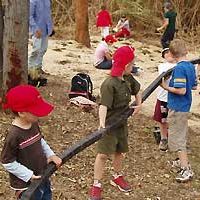 History
The Lugg Street Habitat Brisbane group restarted in 2018, continuing the work done on the Ithaca Creek site which sits between Lugg Street and Dean Street footbridges.
In 2005 this stretch of creek was dominated by cane grass Pennisetum purpureum. Catchment coordinator Melinda McLean and SOWN committee members Robert Dunne and Robert Whyte organised a large-scale community planting in 2005, in what was a precursor to the Ithaca Intact project. The staff, parents and students of Ithaca Creek State School community came out in force, forming a connection to the site which continues to this day.
The site was active between 2007 and 2013 led by Craig Davis. Since the first working bee of the new group in October 2018, group leader Murray Oke has been pleased to get plenty of locals volunteering. There were six or seven people at the first working bee now the group is getting up to 10 to 25 with good support from Ithaca Creek State School and the local Scouts.
For the January 2019 working bee, the local federal member, Trevor Evans MP, turned up as a volunteer.
Murray has promoted the group by utilising the signs around the creek encouraging those interested to contact him.
He then provides the volunteers with detailed information about the plans for the site which is to build on the existing plantings to increase the structural diversity and make a hyper-resilient habitat. He said the early plantings had done well despite floods and infestations of weeds such as Singapore daisy Sphagneticola trilobata and Ruellia sp.
The goal is to improve the local vegetation mosaic to provide further foraging, nesting, shelter and roosting sites for local fauna. The site is being used by a wide variety of wildlife. Birds include buff-banded rail Gallirallus philippensis living in the Lomandra sp., little egret Gallirallus philippensis, royal spoonbill Platalea regia, wood ducks Chenonetta jubata and Pacific black ducks Anas superciliosa. Snakes at the site include carpet python Morelia spilota, keelbacks Tropidonophis mairii and tree snakes Dendrelaphis punctulata.