← Ludwigia peploides var. montevidensis (ONAGRACEAE) Floating Water Primrose Liquidambar styraciflua (ALTINGIACEAE) Liquidambar, American Sweetgum →
Longleaf Willow Primrose is an aquatic plant that infests wetlands and slow moving waterways, native to South America (Argentina, Brazil). Plants are extremely invasive and can form dominant colonies that result in reduced biodiversity and habitat, threatening native species. It was introduced to Australia as a garden ornamental and was first recorded as naturalised near Sydney in 1991. Since then it has become a significant problem in the Port Stephens and Gosford areas on the NSW Central Coast.

Long, lance-shaped leaves cover winged, upright, reddish stems growing 1- 2 metres tall. Younger stems are green or more often reddish in colour (especially when growing in a sunny position) and they are conspicuously square in cross-section. These sharply four-angled stems are usually also somewhat winged. However, they become rounded and somewhat woody with age and may eventually develop bark that is reddish-brown in colour. 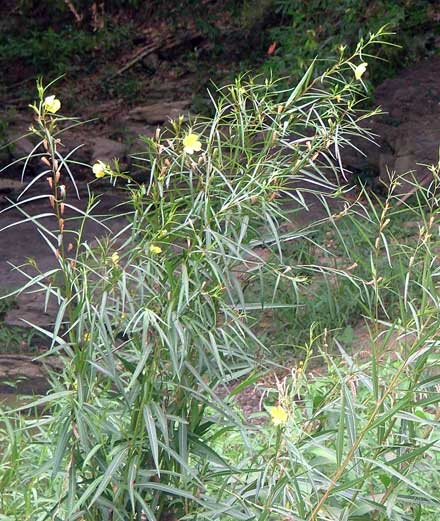 Bright yellow flowers are borne singly in the forks (axils) of the upper leaves. They are borne on stalks (pedicels) 5-40 mm long that are strongly four-angled. Each flower also has four, or rarely five, bright yellow petals (20-25 mm long and 20-23 mm wide) that readily fall off. These petals are broad with rounded tips and very narrow bases. Eight, or rarely ten, fluffy yellow stamens (6-8 mm long) are present at the centre of the flower, as well as a short style (3-5 mm long) that is topped with a relatively large stigma (4-6 mm long and 2-2.5 mm across). Flowering occurs throughout the year, but is most common during summer and autumn. 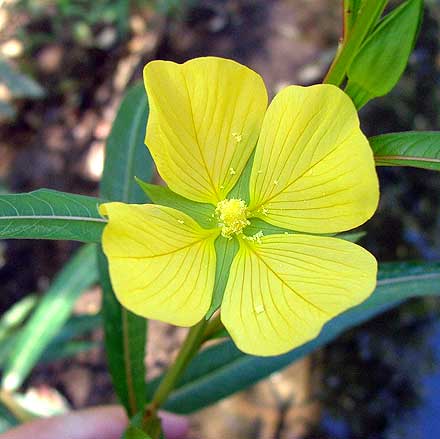 Each flower has four greenish or reddish sepals (10-18 mm long) with pointed tips. These sepals enclose the petals when the flower is in bud and are persistent (i.e., they remain on the fruit as it develops).

Propagation is mainly by seeds although branches can take root and develop into new plants. Seeds are <1mm in size and dispersed by wind, water, human activity, birds and other animals. Seed densities of 25 million per m2 have been calculated. There is a native species of willow primrose Ludwigia octovalvis that can be easily confused with long-leaved willow primrose. This native plant also grows in wetter habitats and is widespread and relatively common in eastern and northern Queensland. Two distinct forms of this species, a broad-leaved form and a narrow-leaved form, are often encountered (sometimes growing together at the same site). However, both forms of this native species can be distinguished from long-leaved willow primrose by their hairy nature (i.e., hairy stems, leaves and fruit), their almost round stems, and their cylindrical or only slightly ribbed fruit. 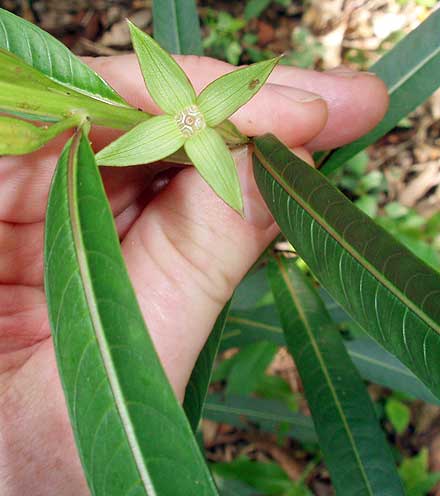 Hand removal of isolated plants is beneficial if they are disposed of carefully. Bag and remove seed pods before controlling plants.

Trees will reduce the growth of Ludwigia longifolia by providing shade and competition.

Correct disposal is essential due to the abundant seeds. All plants should be carefully handled and the fruit / seeds bagged. Vehicles and equipment are likely to contaminate new areas unless cleaned thoroughly. 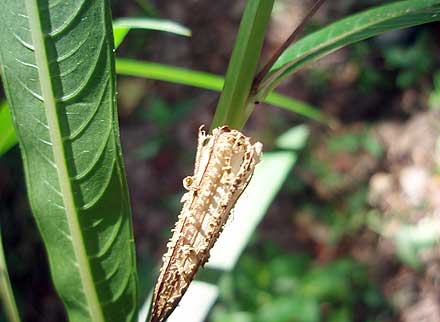