← Lomandra multiflora subsp. multiflora (LOMANDRACEAE) Many-flowered Matrush Lomandra laxa (R.Br.) A.T.Lee (LOMANDRACEAE) Delicate Matrush →
A hardy matrush, similar to Lomandra hystrix but with a W-shaped leaf tip and a slightly more bluish grey colour. Common on drier hillsides where it grows thickly in low clumps. It grows larger in revegetation plantings. Can suffer if mulch is too thick, susceptible to damping off and fungal attack. Likes more draining and poorer soils than L. hystrix. Found in many different habitats including coastal dunes and heath, open forest, creek banks to rainforest. Separate male and female plants. Leaves flat, occasionally rolled, especially in dry conditions, up to 100 cm long, can be 7 mm wide, often shorter and narrower, especially when growing naturally in drier places. Leaves were used by Aboriginal people to make strong net bags and fish traps. They were split lengthways and soaked to soften the fibres. 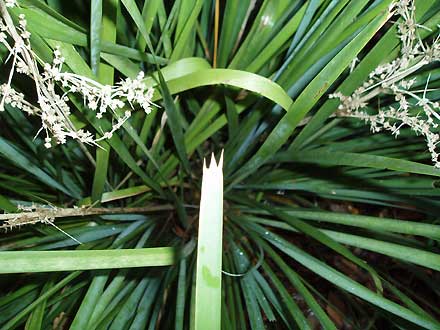 The inflorescences (flower spikes) are scented, whorled clusters on branchlets along a flattened stem, creamy colour, sometimes purplish in the centre. There is a conspicuous spiny bract at the base of each flower cluster. Flowers ellipsoidal or cylindrical, sessile (clasped to the branchlets). The inflorescence is much more tightly clumped than L. hystrix. Outer tepals* (flower parts resembling petals) shiny, purplish or yellow; inner tepals dull, fleshy, yellow or cream. Edible fleshy, white leaf bases, resfreshing flavour of raw green peas, contain starch. Commonly used as an ornamental as a clumping, grass-like herb and in restoration work as a control pioneer along creeks. Increasingly used in street and other amenity plantings as a substitute for introduced plants such as Mock Orange Murraya paniculata and Leriope spp.

* In a general sense, a tepal is an element of the perianth of a flower, such as a petal or sepal. The perianth comprises the outer, sterile whorls of a flower. The term tepal is usually used when all segments of a perianth are of similar shape and color (that is, undifferentiated) – Wikipedia. 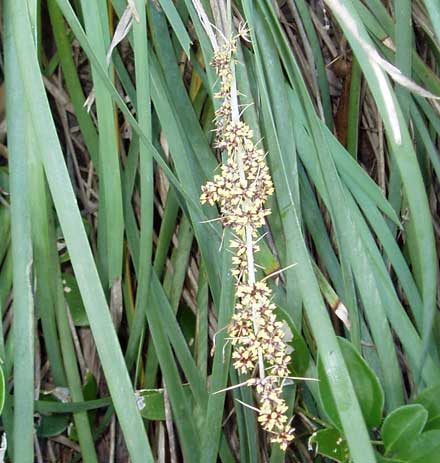