← Lomandra longifolia (LOMANDRACEAE) Long-leaved Matrush, Spiny-headed Matrush Lomandra hystrix (LOMANDRACEAE) Creek Matrush →
Perennial tussock, sparse in marginal rainforest habitats, also in sandy soils over sandstone and in deep sands. Leaves flat, rather thin, 2-4 mm wide, bluish grey when dry. Stanley and Ross state “Widespread but not common in eastern Moreton Region, usually on sandy or gravelly soils.” One SOWN member reported in late June 2015, “I can find about 10 plants flowering on a section of hillside in Enogerra Reserve Ashgrove, and could very quickly find more than 10 with flowers and some with green fruit in the area beside Trinder Rd Ashgrove near Mater Dei. However last Saturday I was unable to find L. laxa flowering in the area around The Pinnacles at Mt Coot-tha, where quite a bit of L. multiflora is just coming into flower.” The Atlas of Living Australia has a distribution map showing L. laxa widespread on the Queensland and NSW coast, extending inland, with most records between the QLD NSW border north to around Gladstone, with some scattered records on the north Queensland coast, the mid NSW coast and central Queensland parts immediately west of the Great Dividing Range near Rockhampton. 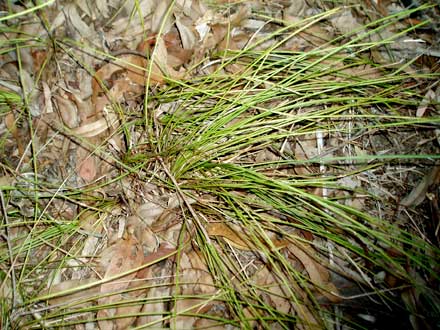 Inflorescence often nearly as long as leaves with well-spaced, separate flowers on fine axes. Flowers creamish white. This specimen was photographed on the Maculata Track, Mount Coot-tha in April 2007. 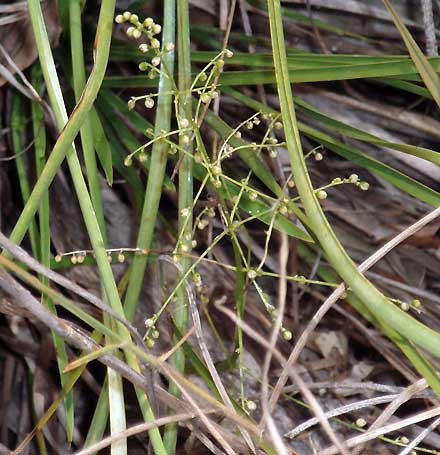