← Litoria caerulea (HYLIDAE) Green Treefrog Limnodynastes terraereginae (HYLIDAE) Scarlet-sided Pobblebonk →
Ground-dwelling tree frog native to eastern Australia, although not Enoggera Creek catchment. One of the largest Australian frogs. Once one of the most common frogs in south-east Australia, the Green-and-golden Bell Frog has undergone major population declines, leading to its current classification as globally vulnerable. Threats include habitat loss and degradation, pollution, introduced species, parasites and pathogens, such as the amphibian chytrid fungus. The common name, Green-and-golden Bell Frog, was first adopted by Harold Cogger in his 1975 book Reptiles and Amphibians of Australia. Before Cogger’s book, its common names were Golden Frog and Golden Tree Frog. It has a pointy snout, long legs, and almost complete toe webbing; the tympanum is large and distinct. It is a large, stout frog, with adults ranging from 4.5 cm to 11 cm. Males are generally smaller than females. The colour of the dorsal surface varies greatly in both sexes. It may be almost completely green, of shades from dark pea-green to bright emerald; green with metallic, brassy, dull copper-brown, or gold markings; or almost completely bronze. During the cooler months (May to August) when the frogs are inactive, colouration may darken to almost black. A creamy-white or pale yellow stripe, bordered above with gold and below with black, extends from behind the eye, across the tympanum to the groin. This stripe rises to form a dorso-lateral fold towards the groin. Another stripe of the same colour begins below the eye and continues to the shoulder. The abdomen is cream or white, and has a coarsely granular texture. The legs are green, bronze, or a combination of both, and the inside thigh and groin are blue-green. Males develop a yellowish colouration to the vocal sac on the throat when mature. The pupil is restricted to a horizontal slit and the iris is golden-brown with a black streak that runs from the corners of the pupil to the horizontal limits of the eye. Spends much of its time basking in the sun on rocks and reeds. It is unusual as frog in that it is often active during the day. When handled, this species secretes a slimy acrid mucus. This substance consists of 17 aurein peptides, with 13 showing broad-spectrum antibiotic and anti-cancer activity; these assist in fighting off harmful microorganisms. Adults have a very broad diet, including insects and other frogs, even of the same species. The tadpoles feed on detritus, algae and bacteria. Natural predators include wading birds and snakes, and the tadpoles are taken by tortoises, eels and other fish as well as a range of invertebrate predators. Breeds in the warmer months from October to March. During the breeding season, males call whilst floating in the water. The call is a deep growl which has been described as a four-part craw-awk, crawk, crok, crok that has been likened to the sound of a motorbike changing gears. The tadpoles are large, reaching 80 mm, but smaller tadpoles are more common. Source: Wikipedia 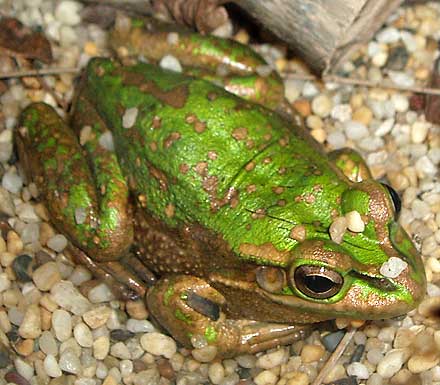