← True friends, false enemies My favourite plant begins with "A" →

Lantana can provide temporary habitat for small birds, mammals and reptiles. This is true, but somewhat over-rated, as the comparison is usually between lantana and bare land. The ideal habitat is structurally complex, biodiverse locally native natural habitat. Yet in some cases lantata is the only habitat left, and provides the only refuge available. Therefore we need to approach clearing carefully.

When confronting lantana, the advice for bushcarers is usually to weed in a mosaic pattern, being sure to leave enough protection for the fauna while your lantana substite is maturing.

But what are good lantana substitutes? In this article we explore the possibilities.

What is Lantana Habitat?

Common lantana (Lantana camara) is a rugged evergreen shrub from the tropics to 1.8 m high and may spread to 2.4 m in width, with some varieties able to clamber vinelike up supports to greater heights, with the help of support. Stems and leaves are covered with rough hairs and emit an unpleasant aroma when crushed (smells like cat pee). The small flowers are held in clusters (umbels) that are typically 2.5-5.1 cm across.

One clue to its success (and vulnerability) is that it is drought resistant and grows in impoverished soils. Extra water and nutrients work against lantana.

The unripe berries are known to be very toxic and the foliage toxic to livestock.

Lantana camara is a Verbenaceae. This family of plants has the following Enoggera species:

Therefore we should consider these as food substitutes. Intermingled with these we should look at the prickly, dense characteristics that protect small birds, mammals and reptiles.

There are many species that have been tried, and only time will tell which will be the most successful.

The next family we might look at is the Apocynaceae. These are known to be drought tolerant and very hardy, and sometimes prickly. 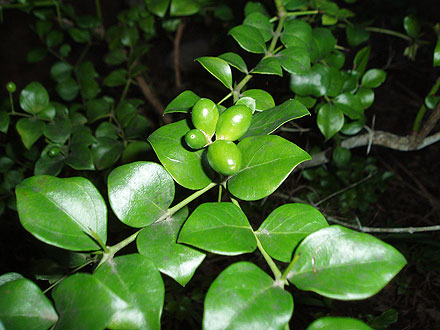 There are other local Apocynaceae SPP including the vines Melodinus and Parsonsia. The ones above are shrubs and while only Alyxia and Carissa are prickly, all are notably toxic in some way or other. This is in common with Lantana, and an extra defence against larger mammals (cats, dogs, foxes), and larger birds (Minors, Magpies, Currajong, Crows, Cockatoos, Galahs, Lorikeets, Kingfishers, Pigeons). These species are notably drought tolerant.

Another much mentioned substiture is Bursaria spinosa, which is certainly prickly, and can become quite dense. Bursaria is one of the Pittosporaceae which has several local spp with spines, they are rugged, drought tolerant and shrubby and all do well in reveg. Some are larger trees, like P. undulatuim.

While bushcare is often proposed as ‘not gardening’, there are some horticultural practices that might come in useful. This involves managing some of the more aggressive thorny plants into thickets by means of judicious pruning.

Another plant that can be managed into a hedge is the extremely unforgiving Cockspur Thorn, Maclura cochinchinensis.

This is a plant which evolved in South-East Asia (Cochin Chinensis is the old name for Vitenam) and is a recent arrival to Australia in geological terms, but nevertheless a local native species.

Maclura could easily be hedged in the open (as a climber it likes to get to the canopy) and anyone who has encountered this plant will tell you – it takes no prisoners. 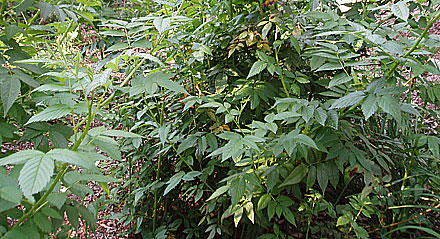 Out of left field

Who has heard of “Prickly Moses”? This Acacia is one of the Heath species also found in Brisbane Forest Park and the Enoggera catchment. It is tough beyond belief.

The Rubus species in Enoggera include probus, an excellent bush tucker which can be even more rampant than Lantana. It has prickly canes. Not only does it produce high volumes of excellent bush tucker, it can form impenetrable thickets if pruned. It is especially useful along pathways through reveg sites, preventing dogs from getting into the planting. This plant could form hedges for protection. It likes plenty of water, and so is only a habitat alternative on the flood plain.

The Australian citrus, both the finger lime and the round lime, would also be excellent habitat and useful bush tucker.

Whatever your choice, plant them thickly!