← Justicia fulvicoma (ACANTHACEAE) Mexican Plume Lantana camara (VERBENACEAE) Lantana, Common Lantana →
Golden Rain Tree is a hardy, fast growing tree well adapted to Australian conditions. Native to Taiwan and thrives in temperate climates. First recognised as a naturalised environmental weed in the 1990s in the Brisbane City Council area where it has invaded urban parks, bushland, gullies and streets. Naturalised in the USA and in Japan. Both Koelreuteria paniculata and K. elegans sp. formosana have been widely planted in Australia. 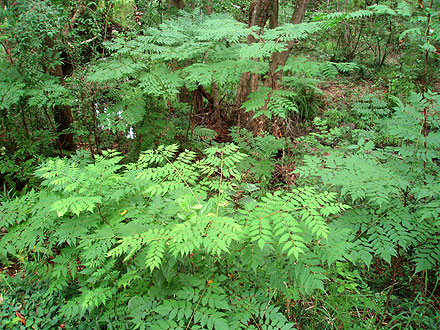 Seed capsules of h K. paniculata are cone-shaped, in contrast to those of d K. elegans sp. formosana a which are more egg-shaped.

Leaves are dark green, hairless, above and paler green below and of variable size and shape. Leaflets are narrow, ovate (pointed at one end and rounded at the other), and have irregularly toothed edges and a long, tapering point.

Flowers are small, butter-yellow with five petals, to 20 mm in length, and occur in branched clusters at the stem tips.

Fruit is an inflated papery capsule that splits into three parts and is light pink to deep rose in colour, up to 50 mm long and appear in large drooping clusters.

Seeds are small, black and round and about 5 mm in diameter.

The potential distribution includes Western Australia and the Northern Territory. 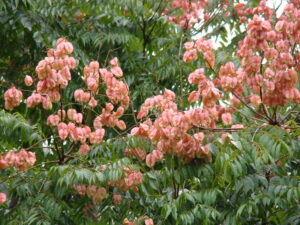