Grows mainly along watercourses, in moist forests and in disturbed areas. Has the potential to colonise the edges of rainforests and invade disturbed areas in rainforests and wet sclerophyll forests, in addition to its ability to smother riparian areas. Can climb to several metres up shrubs and trees or spread out and over the ground and form a dense mat of vegetation. Stems are hairless, but the aerial climbing stems sometimes have numerous small projections. 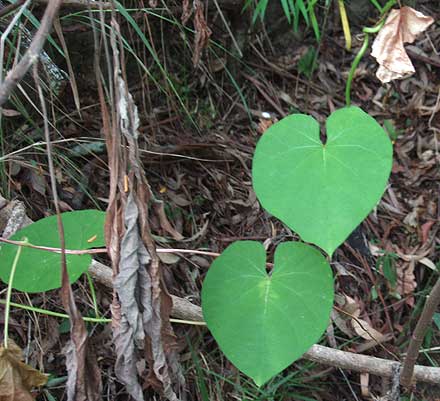 Large trumpet-shaped flowers have a very long and narrow greenish-white floral tube (7- 15 cm long) and five large white spreading lobes ( 10-15 cm wide). They are borne in several-flowered clusters, or occasionally singly, in the leaf forks. They open at night, hence the common name

Large leaves (5-20 cm long and 4-20 cm wide) are alternately arranged along the stems on long stalks (5-18 cm long) and are somewhat thick or occasionally even slightly fleshy in nature. These leaves are usually strongly heart-shaped (i.e. cordate) with pointed tips, but can sometimes be slightly lobed. 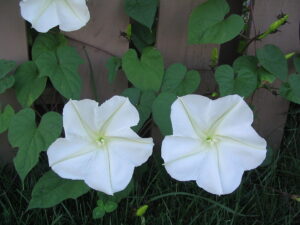 The fruit is a small capsule (20-30 mm long) with a pointed tip. As the fruit matures the flower stalk becomes enlarged, and when fully mature the fruit turns from green to dark brown or blackish in colour. It then splits open to release four large, hairless, whitish-coloured seeds (about 10 mm long) 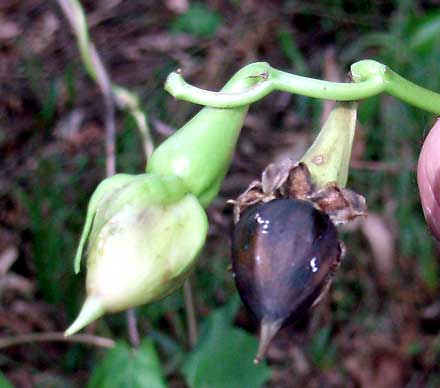 1. Because it is a vine (liana) it climbs over things, some of which are desirable, therefore spraying causes off target damage.

2. Glyphosate (chemical most preferred by bush rehabilitation practitioners, and their local shires, is not very effective. 2,4-D (Amicide) developed by the Alana Fletcher Research Station, is very effective. But if you know this chemical you will know it is rather stinky. It is not residual though, and breaks down fairly quickly (half life 14 days max). It is a herbicide (like Starane-fluroxypyr) selective for broadleaf weeds, meaning it will not affect most grasses. It’s generally used in the acid form which can irritate, but is not especially harmful unless swallowed in quantity.

If the Moonflower is growing in grass, with no desirable broadleaf plant, Amicide might be good, it breaks down in water and soil, especially wet soil,

Like glycines and other Morning Glory species, hand removal is best. Its mass of “cables” can be pulled, especially when soil is damp, but it breaks and leaves roots in the ground. These have to be cut and painted with herbicide, once again Amicide might be best, applied with a 2L hand sprayer (Solo brand).

Hand removal is very laborious, repeat treatments are required to treat regrowth from fragments and seed germination. It grows from plant parts either left in the ground, or even broken bits that establish new plants. It requires incredible patience.

Repeat spray in the growing months, about a month to 6 weeks apart, without any great physical effort if possible, by simply finding the biggest stems, then cutting them at angles, exposing as much as possible of the cut surface, then spray with Amicide, trying to keep your applications at least 1 metre apart so you don’t make contact with the herbicide when it is wet. Do this even though you may be missing some stems. It might take 2 weeks for the treatment to obviously show. Gradually it will become easier as the infestation thins. By doing it this way you don’t break off the stems leaving roots and you avoid plant parts becoming propagules.