← Ipomoea alba (CONVOLVULACEAE) Moonflower Hypoestes phyllostachya (ACANTHACEAE) Polka-dot Weed →
This succulent herb is very common in moister areas, especially along urban creeks. It has been a popular garden plant throughout Brisbane in times gone by, not so popular now as even in gardens it soon becomes weedy and messy. Weed risk low, common but not very hardy.

Impatiens is popular as it blooms reliably in heavy shade, not a common feature.

Leaves are simple, alternate, elliptical to ovate. Sometimes the upper leaves are opposite. Petioles are quite long. The leaf margins are variable, sometimes entire, other times toothed.

Flowers can be pink (usually), red, orange, white, purple. They have five petals and a characteristic spur to about 3 cm. 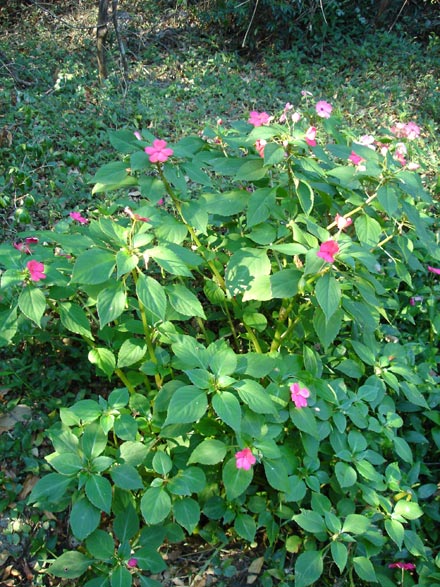