← Cracticus torquatus (Grey Butcherbird) Strepera graculina (Pied Currawong) →
The magpie (Gymnorhina tibicen) is common in parks and suburban gardens. Head, belly and tail tip are all black, splashes of white on wings, lower back, tail, and the back of its head, beak blue-grey, legs black, eyes brown. Song is a beautiful carolling. Can sometimes be heard on bright moonlit nights. Sometimes become quite tame in suburban areas.

Most magpie territories are ‘owned’ by a male and female pair, though they sometime form tribes.

Young magpies and less successful mature birds band together in large flocks of up to several hundred birds, moving from place to place in search of water.

For four to six weeks during nesting they will often defend their territory vigorously. flying low and fast over humans clacking their bills as they pass overhead.

Draw or sew a pair of eyes onto the back of a hat, bicycle or skateboard helmet, and wear it if you are walking through areas magpies are defending. 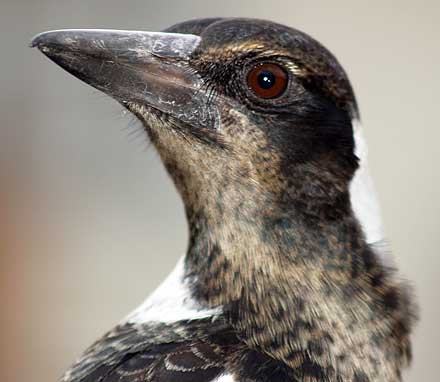