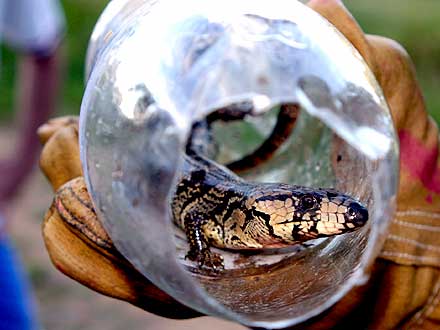 A prime specimen, in sight of freedom. Again from the Queensland Museum Info Sheet: “Pink-tongues often occur in the same areas as blue-tongues, but as a rule they prefer moister habitats. They live in rainforests, wet sclerophyll forests, monsoon forests and open forests of coastal Queensland and northern New South Wales.”

The taxonomic information is quite complicated for this animal. All name changes feature in the Tiliqua (Bluetongues) lineage but not necessarilty the genus.

It is pretty sure that the species name (epithet) will remain gerrardii as that is the species represented in the halotype. The genus is less predictable. (Auusie Python and Snakes Forum)