This Habitat Brisbane Group was restarted in 2019 under the leadership of Janet Mangan. The group meets every second Wednesday morning from 7.30 – 9.30 am.

Until recently, Lyn Martinez was the group leader of The Gap Central Habitat Group based at Nicholas Park. Nicholas Park runs along the creek opposite the back of The Gap State High School.

Ten years ago all the trees along the creek edge were covered by cats claw creeper Macfadyena unguis-cati. A native of tropical Central and South America, cats claw can smother and pull down tall trees.

At the first working bee in May 2007, volunteers removed the cats claw and other weeds to reveal many important native trees such as Weeping Lilly Pilly Waterhousea floribunda Queensland ebony Diospyros geminata and a huge hard quandong Elaeocarpus obovatus. The group planted more natives along the edge of the park to protect the remnant trees. They also planted native species in the middle of the park with the help of the conservation volunteers. 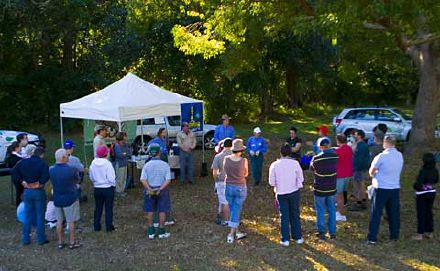 Read more about the first working bee in May 2007

A group of around 25 locals turned up for the first working bee of this new group. The meeting was addressed by Darryl Rush of Habitat Brisbane,…