Eustrephus latifolius is the sole member of the genus. It is usually a reasonably vigorous twining plant but may also occur as a scrambling ground cover. The leaves are lance-shaped to about 80 mm long and have conspicuous longitudinal veins. Flowers are about 15 mm diameter and occur in spring in the upper leaf axils. They are usually white or pale pink with very hairy petals.

The only species in the genus Eustrephus, from Greek, eu, well and strepho, to twist, referring to the twining habit, latifolius having broad leaves. (Comparative, as the leaves aren’t usually very broad, though lamina is variable.) 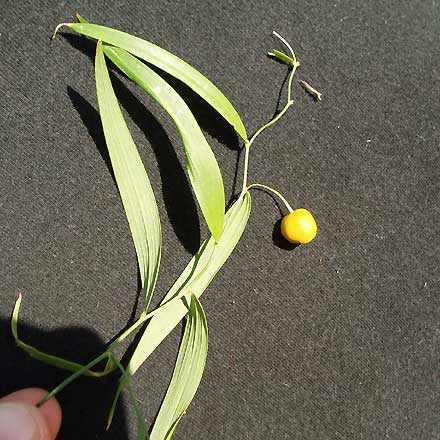 The fruit is largish (10 mm) green to yellow to orange as it matures. The fruit and root are edible, but hardly worth the bother. The raw fruit has very little flesh. The roots bear small tubers up to 30 mm long with juicy flesh with a sweet flavour. Ingesting the root won’t do the plant much good, if you are trying to establish native species. The fruit contains many black shiny seeds that germinate easily. 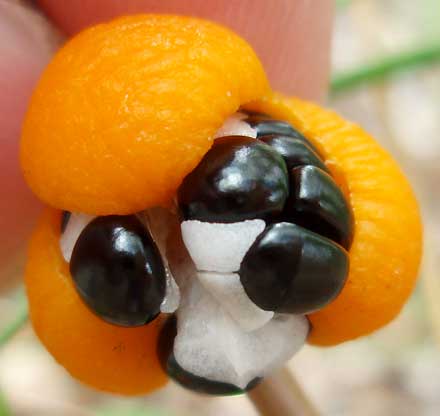 Fruit (a little older than the one above)

Possible to confuse with Scrambling Lily (Geitonoplesium cymosum) of the same family. The leaves have numerous parallel veins, with not as distinct a mid vein as Scrambling Lily. Perhaps more useful as a distinguishing characteristic is the way the terminal leaflets of Wombat Berry are mostly in pairs (opposite) while Scrambling Lily tends to have broader, darker green alternating terminal leaflets. They are interchangeable in revegetation, as they do much the same job. The easiest way to tell them apart is to wait for the Scrambling Lily to fruit, as its fruit is smaller and black. 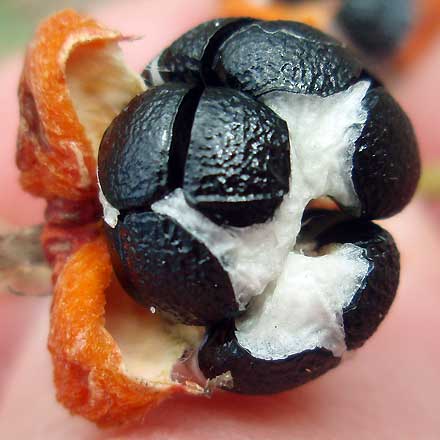 In April 2007 Wombat Berry was seen along the Maculata track (Mt Coot-tha) fruiting in prodigious quantities.

Wombat Berry is hardy in a range of soils and climates and is best if grown in a semi-shaded position, though it can thrive in full or lightly filtered sun. It normally grows on dry hillsides with eucalypts and various native grasses including Themeda. It tolerates extended periods of dry once established. 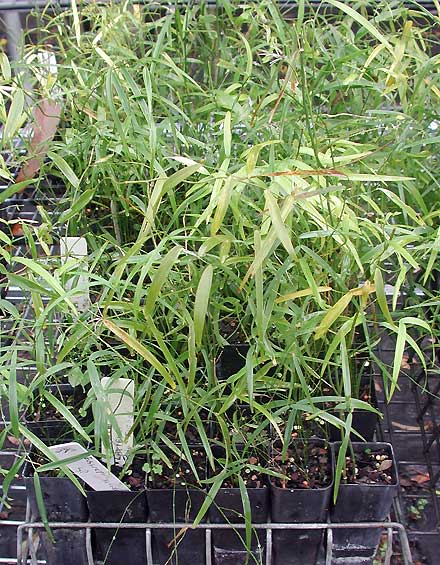