The restoration of this site was started in late 2001. The site was a dry Eucalypt hillside with a weed-dominated gully with some dry rainforest remnants. Both were smothered by Cat’s Claw, Ochna and other woody weeds.

Over the past decade, a large area has been cleared of the weed infestation, a shrub layer has been established and the native grasses and ground covers are now self-sowing. 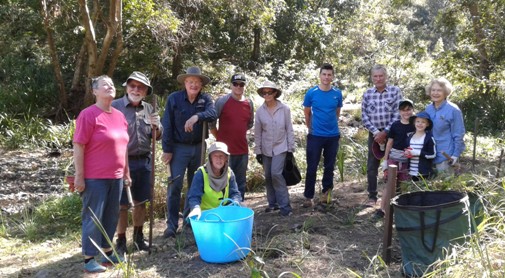 When Dick Harding moved to Ashgrove in 2001 he didn’t buy a house he bought a lifestyle. Dick’s house backed onto a bit of scrub called Enoggera Creek Reserve. In behind St John’s Wood Scout hut, the reserve is a steep hill bounded to the west by Enoggera Creek between Gresham Street bridge and the Royal Parade footbridge.

The hill was littered with rubbish and overrun by weeds but underneath it was an important Eucalypt forest remnant. “There were piles of rubbish, bricks, car engines and water tanks covered with weeds mainly Lantana, Cat’s Claw and Mother-in-law Tongue. Council took away truckloads of debris and green waste,” Dick said.

Although he’s had occasional assistance from family, friends and Brisbane City Council, Dick has been a largely a one-man bush regenerator removing weeds and planting more than 5,000 local species. His method of removing weeds, without spraying herbicide, has seen the regeneration of important local plant species.

“It’s most satisfying as now Queensland Herbarium wants me to collect plant specimens from my site,” he said. The Herbarium is particularly interested in some of the more unusual species of matrush present at the site, particularly Lomandra laxa, Lomandra multiflora and Lomandra confertifolia.

Work on the creek bank itself had been less rewarding with flooding, particularly in 2009, causing major erosion as Enoggera Creek tried to change course. “Big trunks came down the creek six months after The Gap storm taking huge numbers of trees and shrubs,” he said.

Despite setbacks, Dick is pleased with what he has achieved. “The slope is basically rehabilitated. It needs a bit of maintenance with weed regrowth but it has proved resilient. “Sitting back and seeing what you’ve been able to achieve without a great deal of work is very satisfying. The site is pretty bloody good,” Dick said.