← Enoggera Creeks in flood Working together to restore Enoggera Creek at Pender Street →
Despite the floodwaters and high-velocity water flows of the 25-27 February rain event, preliminary assessments indicate that the Enoggera Catchment stood up pretty well – a testament to the work that has been done, according to SOWN President Renée McGlashan.

“There are obviously pockets of damage where vegetation was negligible or newly planted, and creek bank stabilisation was not sufficient,” she said.

With flood waters rising considerably higher than in the floods of 2011 ands 2013, isolated trees in parks were particularly vulnerable to erosion and many were uprooted. Several bush care sites suffered major damage caused by large logs washing down the creek crashing into old-growth trees, creek bank plantings and infrastructure.

Erosion of creek banks and scours in flood plains were experienced at several sites.

Renée said there were some positives reported such as the increased moisture in the ground and some areas were found to be naturally weeded of exotic plants. There were also reports of replanted native species protecting creeks banks from erosion.

“The Lomandra sp. and the native Commelina sp. have repeatedly been found to be good performers for soil protection,” she said.

“This is a great way to support each other in this difficult time,” Renée said. 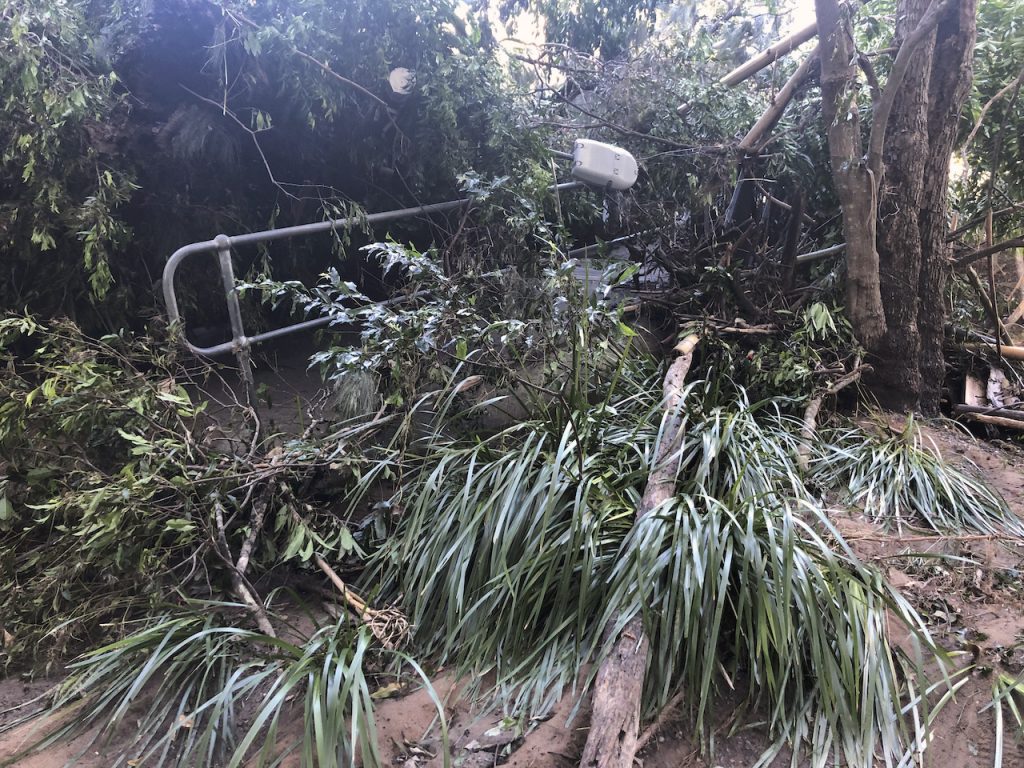 Logs carried by flood waters caused damage across the catchment. There’s a footbridge under this pile of fallen trees tangled with overhead lighting. PHOTO: Anne Jones 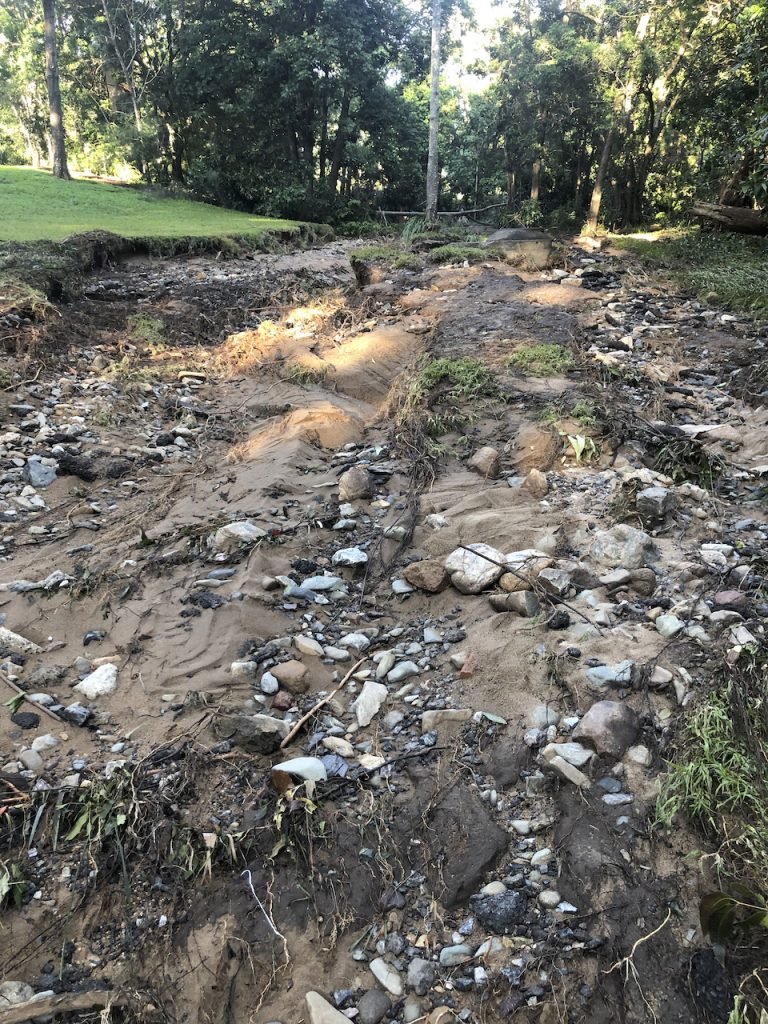 In her report from Three Mile Scrub, group leader Chris Galbraith writes, “Our plants were amazing! I shudder to think how much worse things would have been without them being there.

“No-one could have prepared for the super soggy soil; the battering of high velocity logs knocking our taller trees; the creek trying to find its old course; smaller trees being bent over and totally submerged for days on end; and tons of rubble and sand being dumped over most of our site.

“Despite all that we have maintained:

Anne Jones at Walton Bridge Reserve said there had been extensive damage at the reserve particularly downstream from Walton Bridge.

“Two large casuarinas were washed off the high bank and landed on the footbridge. This cause a major pile up of fallen trees and woody debris around the footbridge and bike path.

“The grassed area on the adjacent low bank was scoured for about 500 metres right through the park from the footbridge and down to the golf course.

“Scouring of the grassed areas at Three Mile Scrub and Walton Bridge Reserve is a powerful argument for widening the riparian zone by planting flood-resistant species such as Waterhousea, Black Beans and Figs,” Anne said.

Waterhousea floribunda before and after the 2022 flood following preliminary cleanup. This low-bank area adjacent to the footbridge caught the brunt of the high-velocity floodwaters with its load of fallen trees and woody debris. PHOTOS: Anne Jones