Donax deltoides is the local edible food and bait pipi of the Queensland and NSW beaches, adults reach lengths of 60 mm.

The shell is strong, and can range from bluish-white, to golden yellow (goldies) or dark purple (known as blacks). The interior of the shell is usually a dark purple or mauve, sometimes with a pink tinge. It uses is muscular foot to burrow into the sand.

Known as the Pipi in New South Wales, the Goolwa Cockle in South Australia and Ugari (Eugary) in Queensland.

Its sharply beaked posterior end is shorter than the rounded anterior end. When exposed, as a result of wave action, they can move and rebury themselves. When this happens in numbers it is called “a rise”.

They are collected as food by SEQ people, and bait by anglers. Mounds called “Dimples” appear on the sand on a rising ride about half way up towards high tide, generally between and around tyre tracks which are thought to bring them to the surface, though this may be coincidental.

Good bait for all surf fish. Their numbers and the numbers of their main bird predator the Pied Oyster Catcher seem to have increased due to commercial fishing which has severely reduced the quality and quantity of fish (their marine predators) on ocean beaches. 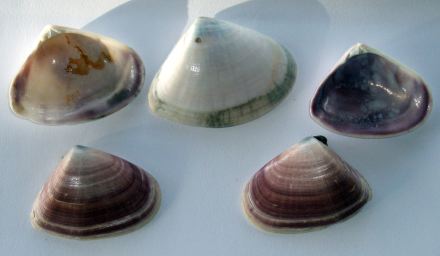