← Cryptocarya glaucescens (LAURACEAE) Jackwood Croton insularis (EUPHORBIACEAE) Silver Croton →
Large shrub or small tree to 6 metres in dry rainforest and along the interface between rainforest and eucalypt forest from Illawarra, NSW to Gympie, QLD and close to Darwin, NT.

Relatively smooth branchlets with only a few scattered hairs and scales.

Leaves are soft, hairless, thin and green above and below and are distinctly finely toothed along the margins.

Similar to Croton insularis in that the older leaves on the plant turn red/ orange before dropping and the bark emits a pleasant odour when injured. Relatively commonly encountered in local rainforest remnants, especially along the exposed, sunnier edges of the forest where it acts as a pioneer species.

Its name refers to J.P. Verreaux, a botanical collector from 19th century Tasmania). 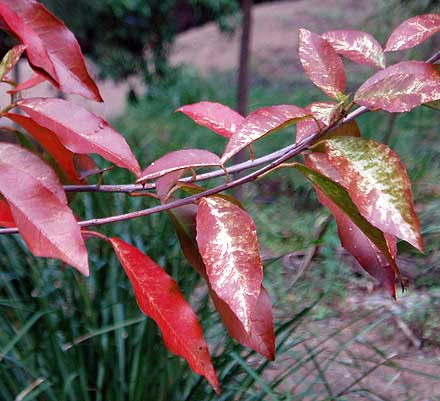