← Cracticus nigrogularis (Pied Butcherbird) Gymnorhina tibicen (Magpie) →
Medium-sized grey and white bird with black head throughout most of the Australian continent in a range of different habitats including arid, semi-arid and temperate zones. Characteristic “rollicking” birdsong. Encountered in the suburbs of many Australian cities including Sydney and Brisbane.

Other birds in the same family include the Australian Magpie, the Currawongs, Woodswallows and other members of the Butcherbird genus Cracticus.

The Grey Butcherbird has three subspecies: C. t. torquatus in south-east Australia, C. t. cinereus is restricted to the island of Tasmania, C. t. leucopterus is widespread from the west to the east coast of Australia. 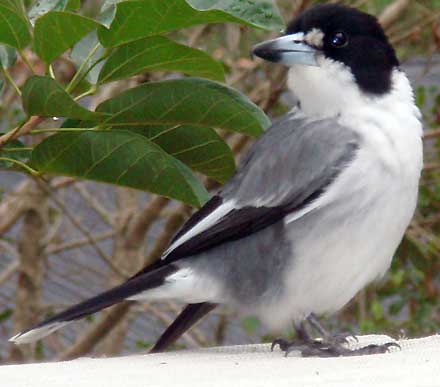