Cracticus torquatus (Grey Butcherbird) →
Medium-sized black and white bird throughout most of the Australian continent. Dark brown eyes and a long, hooked, grey bill with a black tip. Head is black, with a white ring around the neck, white underbelly. Back, wings and tail are black with white patches. Juveniles generally duller than adults. Voice is a beautiful, melodious fluting, sometimes given in turn by several individuals. Larger and more boldly marked than the Grey Butcherbird, C. torquatus. Diet consists of small reptiles, mammals, frogs and birds, as well as large insects. Opportunistic bird doing well in urban areas. Can become tame. Butcherbirds get their name from their habit of hanging captured prey on a hook or in a tree fork, or crevice. Crac-tic-us from Greek cracticos loud-voiced, ni-gro-gu-la-ris from Latin niger black, gularis throated. 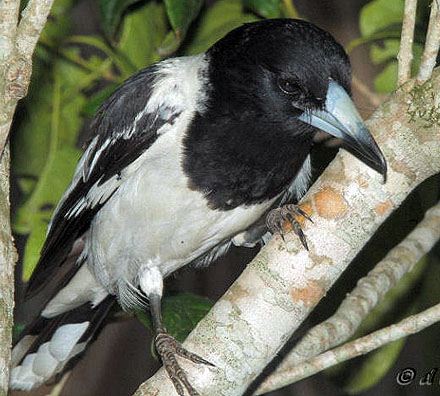 This cheeky critter was scavenging lunch at the picnic tables at Boombana in Diagular National Park (Brisbane Forest Park) on Wednesday, 13 August 2008. 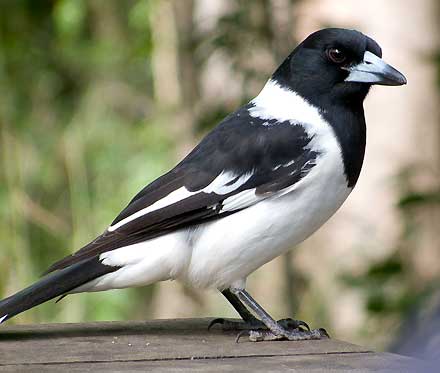 This is a down the nostrils shot of the bird in the photo above. At one point the bird scavenged a grape (white seedless) and beat it to death before eating. 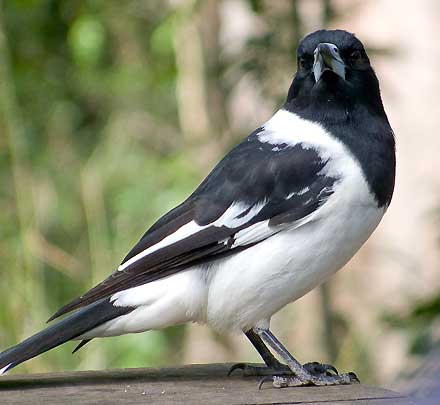