← Corymbia tessellaris (MYRTACEAE) Moreton Bay Ash, Carbeen Corymbia citriodora (MYRTACEA) Spotted Gum →
Medium to large tree to 30 m, fast growing, found on relatively infertile soils from the Brisbane area, to south of Grafton in New South Wales. Found in moister sites along drainage lines. Bark smooth throughout, dull or glossy, white to grey or red-brown or pink or cream, can be mottled or dimpled. Broad leaves alternate to almost opposite, green above, slightly paler below. Seedling and juvenile leaves with stiff hairs, larger than adult leaves. Whitish flowers in groups of three in racemes or panicles December-February. 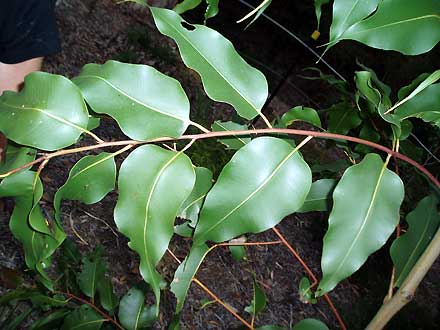 This picture shows a closeup of the bark of a very young, fast-growing specimen which self-seeded in a revegetation area in Walton Bridge Reserve, very close to a path. We left it growing there as it is locally native to the Enoggera catchment. 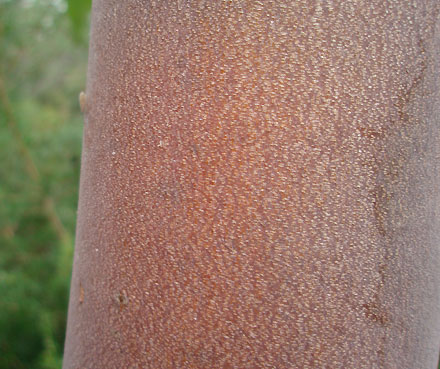 Like the other Spotted Gums, a useful hardwood timber tree. Previously known as Eucalyptus henryi. The type specimen was collected at Stafford in Brisbane. 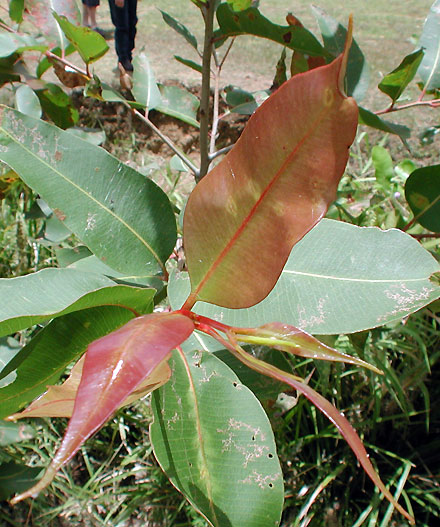