The plant is actually inedible if ingested raw because of needle-shaped raphides in the plant cells — severe gastrointestinal distress can occur. The initial affect on the mouth is an immediate painful irritation, burning and swelling of the lips, tongue and other mouth parts with a subsequent feeling of local anaesthesia. It is also toxic to handle, care needs to be taken with removal. Wear gloves and avoid coming into contact with plant parts. Leaves are usually very large, arrowhead shaped, dark green and velvety. 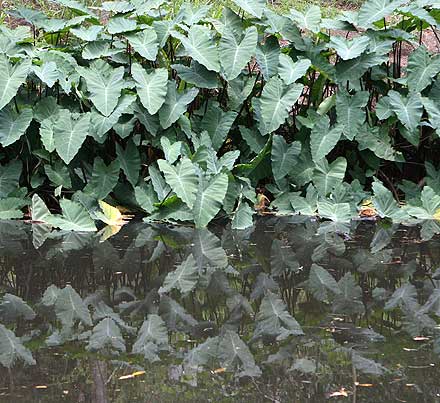 The leaves are peltate (stalked from back of blade). The leaf stems are succulent, often purplish near top. This photograph quite clearly shows the leaf stalk coming into the blade well in from the leaf edge, that is peltate, a characteristic of Colocasia esculenta.

The taro in Brisbane is mostly the common purple-black stemmed cultivar known as Colocasia esculenta ‘Fontanesii’ or a variant thereof. 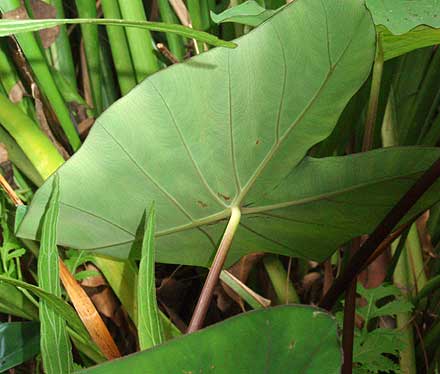 There is another taro called Blue Taro Xanthosoma violaceum which does not have a peltate leaf — the leaf stalk comes in at the edge of the leaf blade. This photo shows leaves of Xanthosoma violaceum. Note the bluish tinge. Blue Taro is much less edible than Colocasia esculenta. You can see the petiole (leaf stalk) in the leaf at the bottom of the photo. 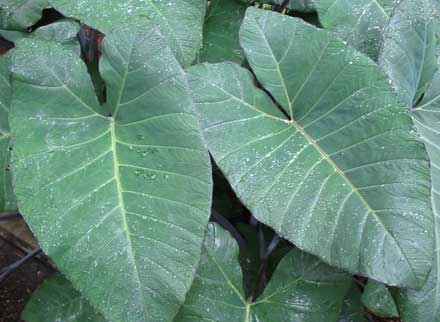 Flowers appear on a fleshy stalk enveloped by a long yellow bract (spathe). Fruit a small berry, in clusters on the fleshy stalk. In this photo, the top half of the flowering structure (spadix) is sterile (i.e., it does not have the little male flowers going all the way to the tip). This is a characteristic of Colocasia esculenta, not Xanthosoma violaceum. 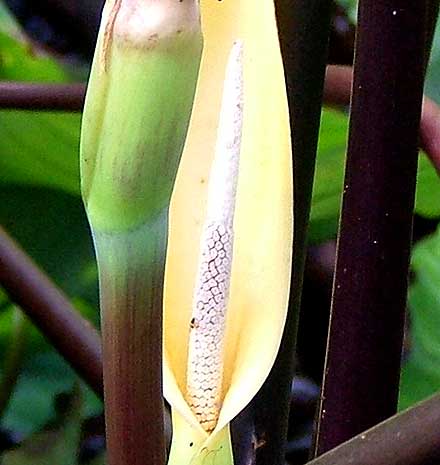 Removing taro is tricky because new plants can grow from roots some distance from the main plant. The plants can be sliced across near the base with a cane knife and neat glyphosate dabbed on the stem, if possible mostly on the green part of the new leaf which takes up the poison best. This will kill the tuber and possibly new plants that are growing by sprouting from the roots nearby.

Usually some material will be left and new plants will continue to emerge, which have to be treated gradually. Others will appear after having drifted downstream, and yet others will come up from seed.

The plants can also be removed by hand, using a mattock to help lift the root mass which can be carried and heaped well above the flood line, and cooked out under black plastic. Removal this way can take with it a lot of the stinky, decaying mass the plants seem to produce and thrive in. It can also dislodge and harm frogs, fish and invertebrates, which should be protected from harm. Mechanical removal will leave some broken plant parts which will resprout.

Wild taro will commonly form monocultures which can be sprayed if care is taken not to let the spray drift into the water. Even though the leaves are quite moisture repellent, do not use surfactant as this is known to harm frogs. 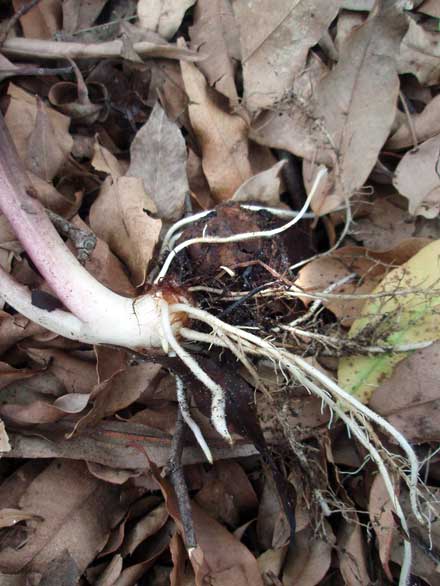 This plant has resprouted from an old tuber. Photo: Robert Whyte