Chinese Elm is a large tree (10 – 30 m tall) with smooth bark, crenate (scalloped) leaves and conspicuous dark orange fruit during summer. It is deciduous in winter in Brisbane.

Probably the worst and most widespread of Brisbane’s weed trees. Another like it is the Camphor Laurel. Uncontrolled, they outcompete native regeneration.

Native to China, Korea and Japan, Chinese Elm was introduced as an ornamental in parks, gardens and along footpaths. Branches are grey with mostly smooth bark.

Alternate, ovate (egg-shaped) leaves are scalloped (crenate) and taper to a blunt point. Leaves have three main veins at the base.

Note the bugs at the left and right hand sides of this picture. 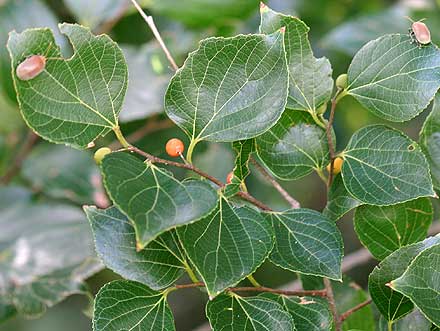 Young stems have a somewhat zig-zagging appearance and are green or tan coloured. and have obvious lenticels (breathing pores).

When a mature Celtis sinensis is anywhere near, thousands of seedlings will come up in the surrounding bush. Birds will also carry the seed to other areas. 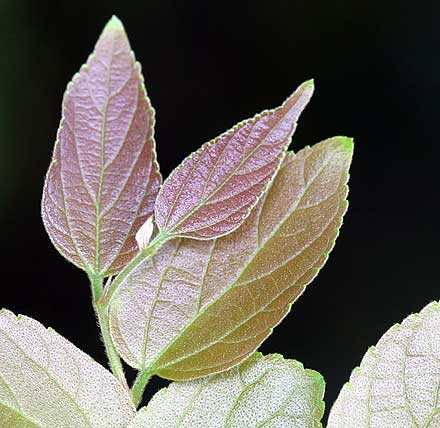 Weedlings can be pulled out but saplings and mature trees have to be cut and poisoned. Larger trees are stem injected with poison and left to die, providing bird roosts.

Frilling (multiple cuts around the trunk, evenly spaced so as not to ringbark the tree and then filled with poison within 10 seconds) is quite effective. The trick with frilling is to do it when the tree is growing vigorously. Try not to damage the tree, as a damaged tree will go into shock and not take up the poison. Just create cuts that would normally scar over, and squirt in neat (undiluted) poison straight away. 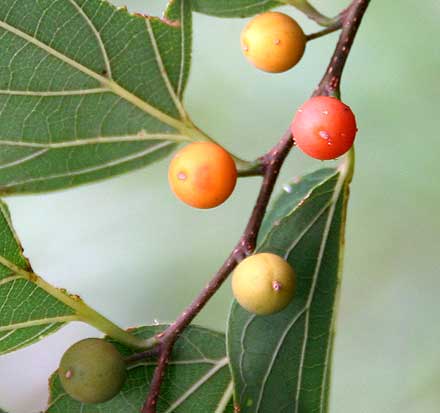 Flowers are inconspicuous (in spring). The fruit is relished by all sorts of birds and spread widely. The open nature and height of the tree continues to attract the wrong sort of bossy larger birds, a problem in suburban Brisbane. 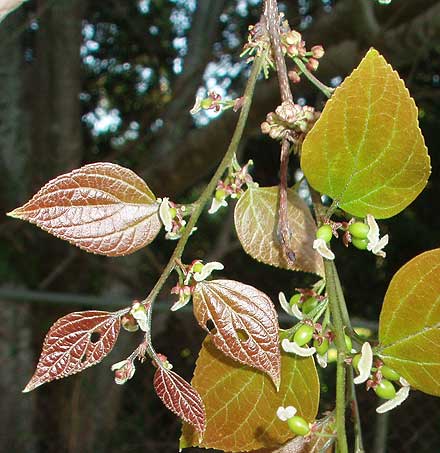