The Bush Stone-curlew Burhinus grallarius is a large, ground-dwelling bird endemic to Australia.

Like most stone-curlews, it is mainly nocturnal and specialises in hunting small grassland animals: frogs, spiders, insects, molluscs, crustaceans, snakes, lizards and small mammals are all taken, mostly gleaned or probed from soft soil or rotting wood; also a few seeds or tubers, particularly in drought years. Birds usually forage individually or in pairs over a large home range, particularly on moonlit nights.

During the day, Bush Stone-curlews tend to remain inactive, sheltering amongst tall grass or low shrubs and relying on their cryptic plumage to protect them from their only natural predators: raptors. When disturbed, they freeze motionless, often in odd-looking postures. For visual predators like raptors (and humans), this works well, but it serves little purpose with introduced feral animals that hunt by scent, notably foxes.

Despite their ungainly appearance and habit of freezing motionless, they are sure-footed, fast and agile on the ground, and although they seldom fly during daylight hours, they are far from clumsy in the air; flight is rapid and direct on long, broad wings. 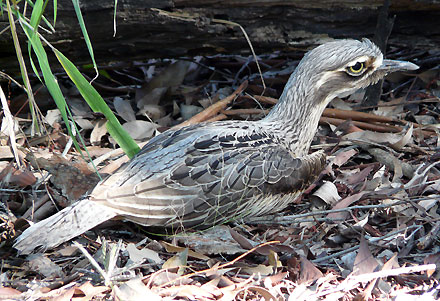 Photo: Robert Whyte, photographed in the grounds of Government House, Bardon, during a joint planting event and tour with SOWN, Cubberla-Witton Catchments Network and Landcare.