← Bryophyllum sp. (CRASSULACEAE) Mother-of-millions Broussonetia papyrifera (MORACEAE) Paper Mulberry →
Brugmansia suaveolens is a semi-woody shrub or small tree that gets to 5 m, usually with a many-branched single trunk. Native to south-east Brazil. All parts of this and other angel trumpets are highly toxic. Deaths have occurred. Weed risk high due to toxicity and rampant nature of infestations. Occupies sunny positions. Leaves are generally oval in shape, up to 25 cm (larger in shade). Flowers are remarkably beautiful, sweetly fragrant, about 30 cm long and shaped like trumpets. The corolla has five points that are slightly recurved. The flowers are usually white but may be yellow or pink and are pendulous, hanging almost straight down. Widely grown as an ornamental everywhere. It is hardy and has escaped cultivation and established in residential areas throughout much of South and Central America, Mexico, and even in parts of south-central Florida as well as Australia. 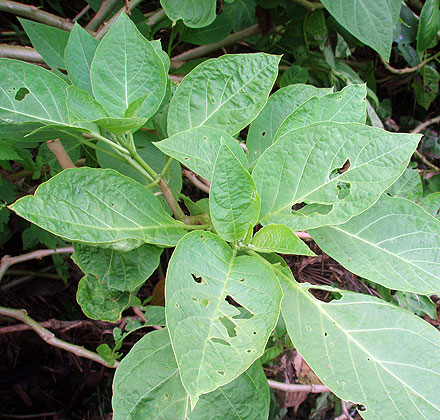 The five species of Brugmansia formerly were included in the genus Datura, which now includes only the Angel Trumpets that are annuals or short-lived perennials; herbaceous as opposed to woody; and have erect rather than pendent flowers. This plant is a scourge if it manages to get into any waterway. It behaves like a true monster willow and takes off and colonises. Roots in the creek bed like huge thick ribbons, metres from the mother plant it then suckers and forms huge creek blocking colonies. It does not seem to form seed but it is brittle and is broken into bits of node cuttings in any flood or high water event and floats downstream to be left in detritus behind rocks etc and there you have the start of a new major colony. 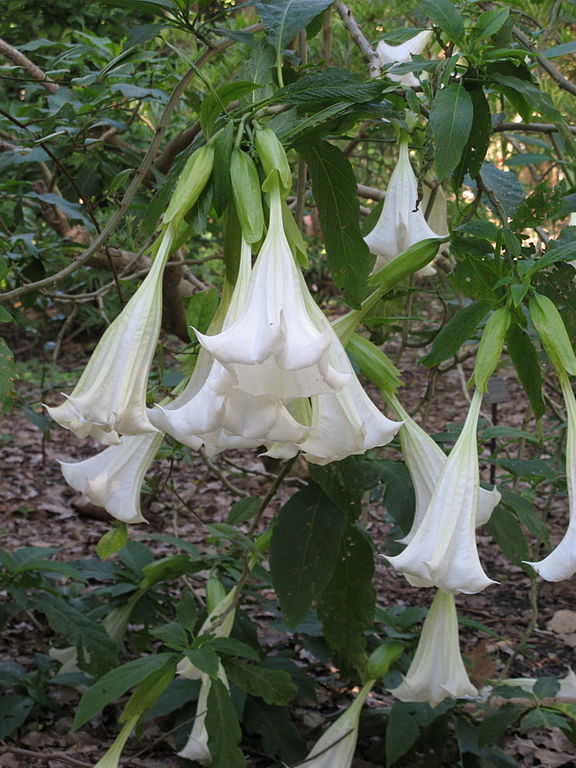