← Brachychiton discolor (STERCULIACEAE) Lacebark Tree Bothriochloa bladhii (POACEAE) Forest Bluegrass →
This tree is widely planted in gardens and in bushcare sites, but is not strictly speaking an Enoggera species, not being recorded in D’Aguilar National Park, but its range is neverthless coastal rainforests from central New South Wales to far north Queensland. May reach 30-35 metres in height although it is usually much smaller in cultivation in cooler areas. Brachychiton from Greek, brachys, short and chiton, a tunic, a reference to the coating on the seed. Acerifolius having foliage like the genus Acer (maple). Acer means star in Latin. Leaves are about 250 mm long and may have entire margins or be deeply lobed. Its popularity stems from its attractive crimson flowers and its green trunk. 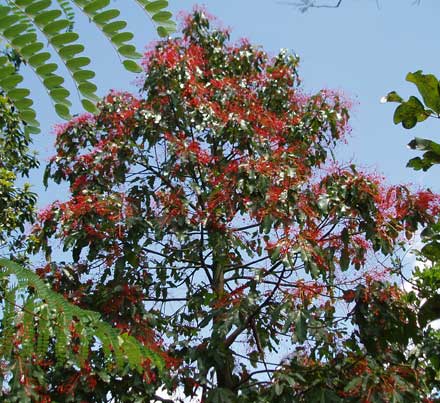 Generally deciduous before flowers are seen in early summer. In some seasons foliage will be retained on all or part of the tree. Flowering may take around 5-8 years from seed. Hardy in a wide range of soil. Host to larvae of Common Aeroplane Phaedyma shepherdi, Tailed Emperor Polyura sempronius, Common Pencilled-blue Candalides absimilis and Hairy Line-blue Erysichton lineata. 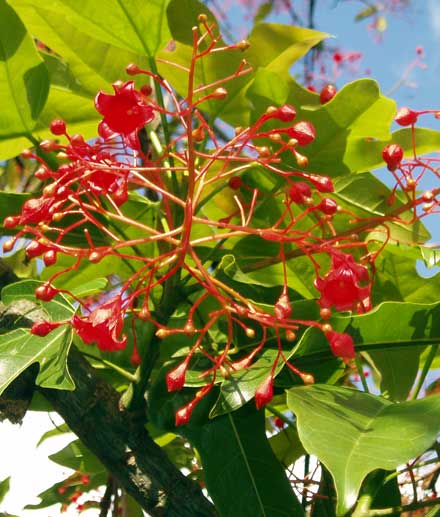 The bell-shaped flowers occur in clusters at the ends of the branches. Propagation from seed is relatively easy without any pretreatment. The seeds are surrounded by irritant hairs (collect using gloves). The insects congregating in the seed pods in this picture are probably the Cotton Harlequin Bug Tectocoris diophthalmus. They normally feed on the Malvaceae such as the Native Hibiscus Hibuscus heterophyllus but references notes three Brachychiton hosts in Sterculiaceae including B. acerifolius. 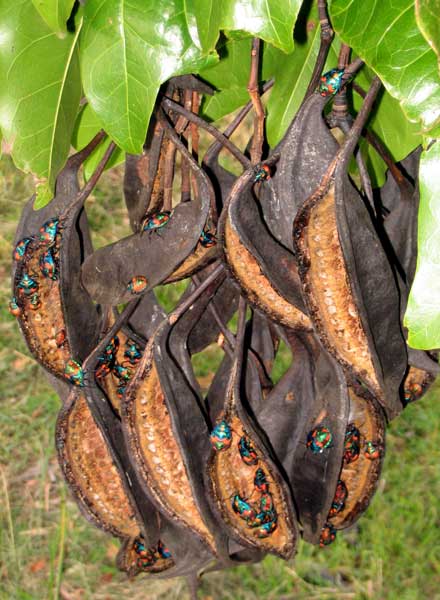