Bowman Park is on Simpsons Road, Bardon. It borders Ithaca Creek and includes three frog habitat sites – Ithaca Creek, an ephemeral pond and ‘Frog Creek’. Rehabilitation and revegetation work started in 1993 with the aim of preventing mowing in a grassy rain-filled depression where frogs had been observed to breed.

In 1995 the Bowman Park Frog Habitat Group was formed by members of the Queensland Frog Society. Activities include weeding, mulching, and planting.

Members of the local community are welcome to come along and join in working bees which are held on the 1st Sunday of every 2nd Month, Feb, Apr, June, Aug, Oct, Dec, from 8am – 11am. 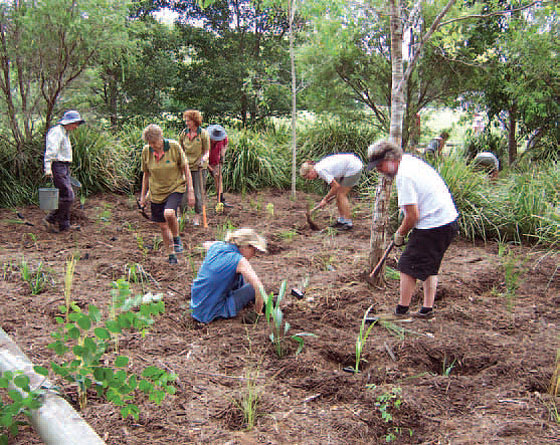 Frogs and Bowman Park 1999
The Bowman Park Frog Habitat Project on Ithaca Creek is a great example of what committed people can do to help frog conservation. The Queensland Frog Society had recorded, in one small section of the park and Ithaca Creek, breeding populations of the Tusked Frog, Striped Marsh Frog, Green Treefrog, Eastern Sedgefrog, Graceful Treefrog and the Stony Creek Frog, Litoria wilcoxii.

Upon learning of these frog populations, the Brisbane City Council declared the site a protected frog breeding area and agreed to replace a concrete spoon drain with a natural creek restoration. Large boulders were used to provide bank stability and smaller rocks and gravel were used to form the creek bed. Additional boulders and logs were used to provide shelter and perching sites for the frogs.

About 50 locally native-species of plants were recommended for the project and over 3000 individual plants were used in the reconstruction. The Great Barred Frog Mixophyes fasciolatus has been observed in the park since the project was completed, bringing the totally number of resident native frogs to seven. Five of these species are now known to be breeding in the new ‘creek’.

Revegetation work has also been undertaken by various groups along the banks of Ithaca creek including Men of the Trees and SOWN. 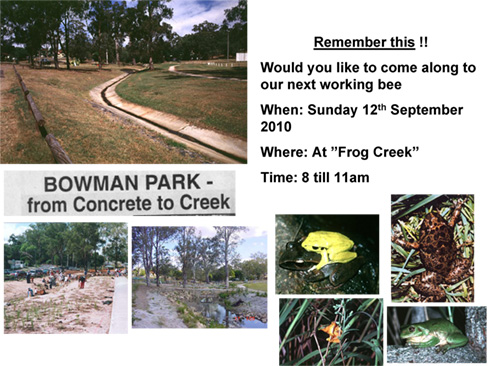 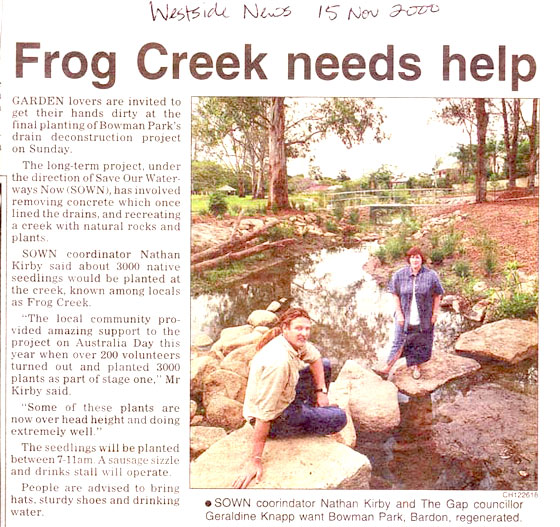 You can say no to concrete – and win

Terri Templeton was already a multi-tasker when she staged her sit-in of Ithaca Creek. Working ten days per fortnight while caring for her four children and two elderly parents didn’t give her much time for relaxation. The creek helped. It was an important part of family life, a place to relax, walk the dog, have a barbecue.

Terri was not impressed when Council workers began the process of cementing the creek’s banks. So she staged a sit-in. It was 1996. Terri was a committed environmental activist since being shocked at a beach in Sydney to see sewage, tampons and toilet paper floating in a seawater pool. This experience made her acutely aware of the pressures on the environment around her.

When she saw the council workers pouring concrete into her creek, she rushed home, quickly rang as many people as she could, and then returned to the site with her daughter and two folding chairs. They set the chairs in the stream bed right in front of the workers who were laying the steel reinforcing. The workers were sympathetic to Terri’s position and immediately stopped work. Then within twenty minutes two councillors, the manager of the works department, the Save Our Waterways Now coordinator and several other people were on site, arguing the toss.

The upshot of all of this was they stopped not only that concreting of 50 metres of creek, but also stopped similar concreting throughout Brisbane. Plans had been afoot to concrete all creek-road crossings near culverts. A major restoration was then carried out and the creek was restored as a natural watercourse. Quite an achievement. Well done Terri.