It grows on trees (epiphytic) or rocks (lithophytic) and occasionally in the soil.

Large, elliptical shaped, leathery fronds rise from a central stem to form a deep, saucer shape. The diameter of the spreading fronds can reach 3 m, smaller in northern places. Fronds unroll and have a very prominent dark midrib and undulating margins.

Spores on the underside of the fronds in parallel rows.

A hardy and popular fern in cultivation, likes plenty of moisture, good drainage and plenty of organic material. Can withstand plenty of sun, likes some shade.

Propagate from spores or by division.

There are about 700 Asplenium species worldwide. Around 30 are native to Australia.

Asplenium… from Greek, a, without and spleen, referring to medicinal properties affecting the spleen. 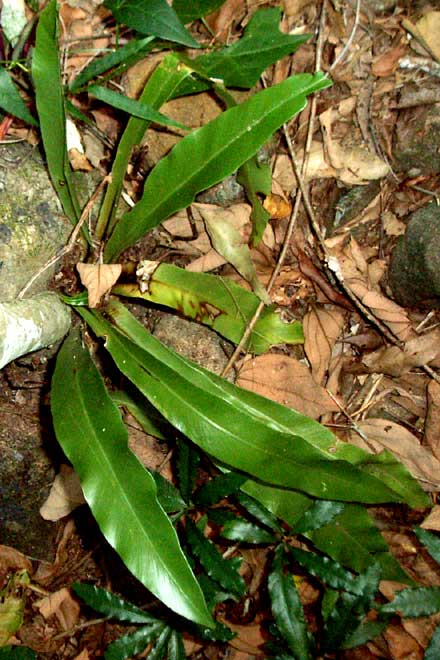 Asplenium australasicum may be confused with A. nidus which is found in North Queensland. Like most attractive, large ferns, has suffered from being poached from rainforests for garden use.

If conditions prove unfavourable temporarily recovers quickly with the assistance of rain even though the leaves may look wilted, brown and beyond repair.

The nest shaped radiating fronds rainforest litter which rots and forms a growing medium for the root system.

The root system is small, considering the size of the fern, but it is dense and spongy and is covered with persistent brown root hairs. 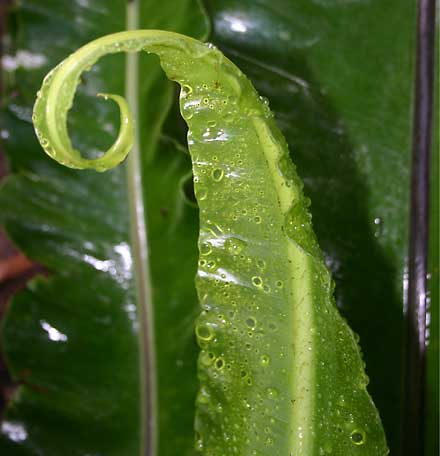 One particular Sunday in April 2004 we were invited to relocate two of these magnificent Crows Nest Ferns (Asplenium australasicum). We gently removed them from May’s garden and loaded them in barrows with some lillies. 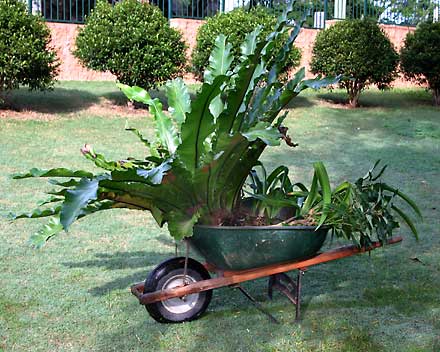 Rob, Nick and Crows Nest ferns rolling carefully down Waterworks Rd. It happened to be Anzac Day. Ours was a most unusual Anzac Day march. Rob is wearing his fine, lairy shorts and sock protectors. 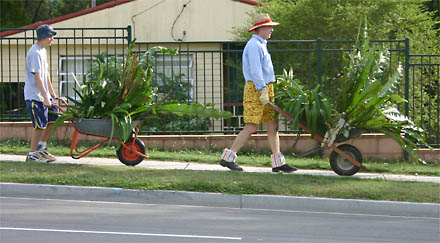 The task is completed. Anne, Rob and Nick pose for the camera. The spot may well turn out to be too shady because of the revegetation work adding canopy in that area. Oh well, we can always move them again.

Note the hose — those were the days! 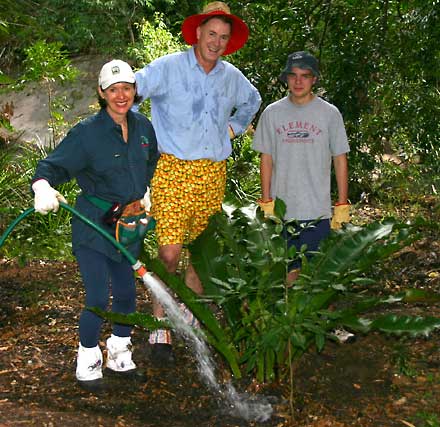