It forms dense stands on disturbed sites, sand dunes, in wetlands and riparian habitats. Generally growing to 6 m, in ideal conditions it can exceed 10 m, with hollow stems 2-3 cm diameter.

Leaves are alternate, 30-60 cm long and 2-6 cm broad with a tapered tip, grey-green, and have a hairy tuft at the base. Overall, it resembles an outsize Common Reed Phragmites australis or a bamboo.

Has been cultivated throughout Asia, southern Europe, northern Africa, and the Middle East. Has been used to make flutes for over 5,000 years. The pan pipes consist of ten or more reed pipes. 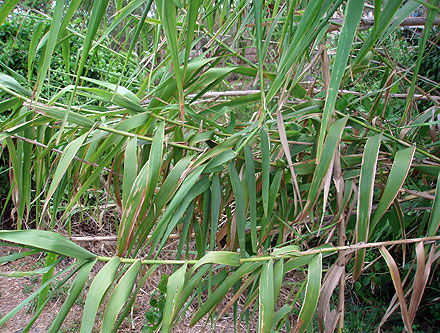