← Planting guides and tips Robert Whyte keeps Ithaca Intact →
An interesting question. The reason I was asking myself this was because I had observed that when I sampled good natural areas with lots of native plants they yielded up more spiders than nearby weedy areas. As spiders are widely considered a indicator of biodiversity (see “What is Biodiversity?” below) I decided to do an experiment. I would test natural areas against weedy ones. I have been encouraged in my investigations by the support of Dr Robert Raven, Queensland Museum, who has been impressed with what I was finding, especially through the colder months. What did I discover? Was the evidence in favour of the hypothesis? Scroll down and read on for the story.

On the first day of the experiment I walked through a good quality patch of remnant rainforest known as “The Island” on the northern side of the junction of Fish and Enoggera Creeks, Walton Bridge Reserve, The Gap (GPS: 27°26’39.08″S 152°57’17.00″E). My method was to choose a likely looking clump – usually with two or three types of intermingled vegetation, e.g. Green Kamala, Guioa, Hovea and Derris vine – put a white tray underneath and give the foliage a bash with a stick. These types of intersections have proved to be rich hunting grounds for spiders. As well as the tray-underneath method, sometimes, while walking through, I would lean the top of a small Jagera, Backhousea, Rapanea or similar shrub over the white tray and give it a shake. 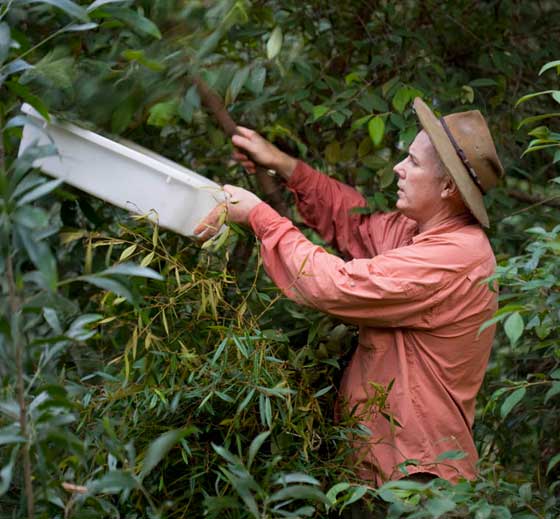 These pockets of remnant dry rainforest had reliably proved to be quite high in numbers of animals (abundance) in many genera and species (biodiversity). I would regularly observe a half dozen common Lynx, Jumping and Crab Spider genera, but as well, up to another dozen or so less common genera. On one occasion I collected a possible male Paraplectanoides crassipes. Dr Volker Framenau, WA museum, has written to say that if this is indeed Paraplectanoides crassipes, as he believes, it is a truly rare and valuable discovery.

Prior to starting the experiment my records were very casual, and I merely gained a general impression that natural areas were more biodioverse.

On this day Wednesday, 1 July 2009 I paid closer attention, but still did not take note of exact numbers. The counting of genera and species and the quantity of animals was not rigorous. I observed about 10 insect genera, 18 spider species in perhaps a dozen genera and a couple of molluscs (a semi slug and a snail). This was fairly typical of a survey of this area of natural bush, a small pocket of good quality dry rainforest containing about 200 plant species.

My hypothesis predicted that extensive sampling of weedy areas would be shown to be comparitively depauperate in terms of fauna. 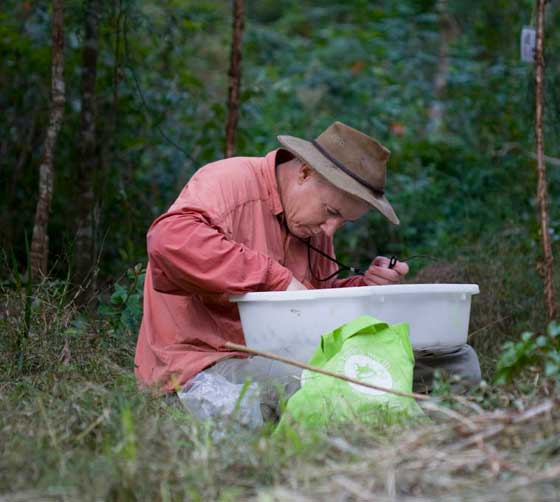 The second day was the turn of a weedy thicket of Cape Honeysuckle (Tecoma capiensis), immediately adjacent to the natural area sampled previously. I had found very little in this area before.

As the hypothesis had suggested, what I sampled, after a seriously prolonged session, was neither abundant nor diverse.

Instead of about a dozen spider genera or more, I saw only three genera. There were four specimens of the common ant eating Salticid Zenodorus orbiculatus, an immature Opisthoncus and a smally silvery Cyclosa juvenile. The only specimen collected for observation “in the lab” was the Cyclosa juvenile, a pretty spider about 3mm long, possibly Cyclosa insulana.

Apart from spiders there were only a few other arthropods including a lone Lauxaniid fly, a Paddy Bug, and a few leaf hoppers.

Based on this single result this quite weedy area, not very far from good habitat and with a stray few native species at the canopy, mid story and ground level, was comparatively very low in the number of genera, species and the total number of animals. 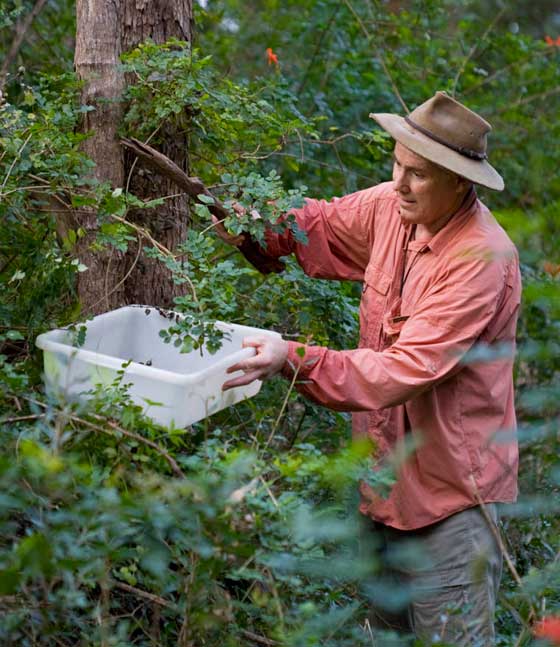 Checking the results of the weedy area. Photo: Mark Crocker

On the third day it was back to another natural area, this time along the creek, in an area that had been under water in the recent flood (May 20 2009). This area was restricted to only two or three plant species, being mostly Brown Myrtle (Choricarpia leptopetala) with some Guioa, and Calystamen.

While this was a natural area, it was relatively low in numbers of species, and in the number of animals overall. It was also quite hard to sample, the foliage not being easy to tuck the tray under.

However it was more biodiverse than the session in the weedy Tecoma, with 6 specimens being brought home to study further including included Sydymella, and Cymbacha, both Thomisid species, and a Thwaitesia, a spider I had not so far found in weedy areas or gardens.

This suggested that the plant biodiversity was also a factor, not just whether the plants were natural or exotic. 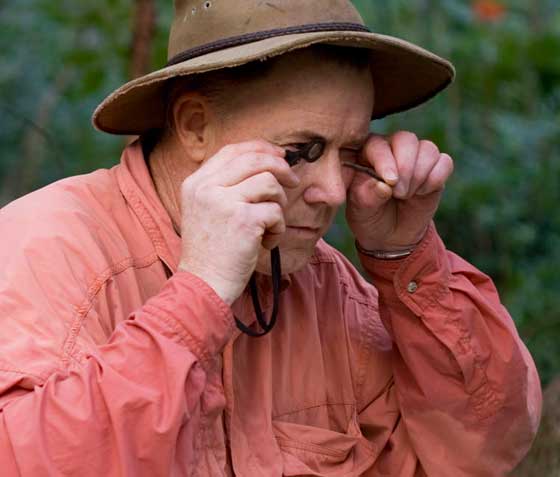 I have to say at this point that I was beginning to have serious doubts about the frames of reference of this experiment. Not only was it far from rigorous, it was also very likely to be influenced by wishful thinking. In other words, I may be finding the results I wanted to find.

I decided at this point that to negate the possibility that I simply “wasn’t trying hard enough” in weedy areas. I would have another go at the weedy Tecoma. This time I bashed it it more vigorously and clambered to areas where the foliage was very dense. As a result I gathered a very substantial amount of leafy material in the tray, at least 5 times as much as I had gathered in the natural area on Day 3.

I had no misgivings about bashing the weeds this hard, after all, they were soon to be removed. This was their last chance to yield up their secrets.

Also in the tray was a significant amount of leaf litter from a Hoop Pine (Araucaria cunninghamii). It was important to consider this in the results as influencing the quantity and quality of the fauna. Also nearby Acacias, Jagera, and Rapaneas were growing in amongst the Tecoma. This wasn’t as weedy an area as I had previously thought and in this sampling I was getting closer to some of the native species. Therefore I expected that I would find more species and more animals than previously where I had concentrated on parts of the weedy patch that were nearly exclusively Tecoma and away from the natural species.

This proved to be the case. I sifted through a great many animals, and bagged 15 specimens to take home for further study. Admittedly some were very small, not much bigger than a speck of dust. I found later when I got home that at least one of these was in fact a speck of dust.

The specimens I took home did not intentionally include the very common species I had already documented thoroughly. Taking this into account I estimate this sampling produced about 20 species in possibly 8 genera, including Cheiracanthium, Leucauge, Cyrtophora, Moneta (male and female), Uloborid, Thomisus, Cymbacha, Argyrodes and a new genus for me, Euryopis, a Theridiid.

This all left me rather confused, Certainly natural areas with good plant diversity and density yielded the most species and the most interesting specimens, both of spiders and also invertebrates in general.

But weedy areas with high density and a few native plant species scattered through them also offered up good quantity and quality if sampled with vigour.

Weedy areas with some native species, adjacent to good natural areas also show reasonable biodiversity, about half as biodiverse as a similar, good quality natural area.

The native areas produced far higher quantities of “less common” species, but this is not to be unexpected, as the more common species are those found in backyards, observed much more often than wild areas.

We will report on these investigations in “Are natural areas REALLY more biodiverse?” part 2.

Are natural areas REALLY more biodiverse?” was written by Robert Whyte during July 2009.

A Checklist of Australian Spiders – Compiled by R. J. Raven (Queensland Museum). Based on N. I. Platnick’s ‘The World Spider Catalog, V5.0

Spiders of Australia: An Introduction to their Classification, Biology and Distribution: Trevor J. Hawkeswood – New and used through ABE Books

In response to the article above, entomologists and arachnologists have been extremely generous with practical advice and feedback based on their own experience.

Dr Scott Carroll, University of California-Davis pointed out the “focus on small-bodied, ectothermic predators gives you the inferential power of working with predators without losing the statistical power that most studies relying on higher trophic levels suffer.”

Scott went on to suggest that a strong way to sample scientifically might be to describe (qualifying and quantifying) the plant communities that might determine what the spiders can and cannot get up to. He wrote that to do this one could “define, a priori, general criteria for your relatively natural and relatively weedy areas (perhaps with a high and a low plant diversity class for each) and then use those criteria to designate some good-sized areas to each (e.g., areas of a few hectares if possible). Then assign at random several small areas within each habitat class, and sample those, which might be regardable as replicates, depending on the nature of spider ranging behavior.”

Scott also suggested we could: “Attempt to define particular spider species, genera, subfamilies or families that you predict would show strong signals based on peculiarities of their biologies, and make direct hypothesis driven contrasts with other spider groups for which you expect differing patterns of habitat use, residence, persistence and or survivability. Eventually such an approach could spare you from the need to sample all of the spiders, grouping types that might result in ‘mixed signals’.” (pers. corr.)

Dr Ron Atkinson, who publishes the “Find-a-spider” site, easily the best online Australian spider identification resource, found the results of my survey to match what he would have expected. He wrote:

“Although many spiders can migrate quite large distances by ballooning, the majority probably don’t travel very far in a hurry and mostly walk rather than flying on the wind. For this reason, a drastic clearing of an area of natural forest will have a devastating effect on the numbers and diversity of spiders in that area. If weeds then take over the cleared area they will generally produce an area of reduced plant diversity because the most feral plant species will dominate. It will take a long time (if ever) for the full range of spider species that originally lived in that area to recolonize it, although the presence of some native vegetation scattered throughout the cleared area will probably allow the faster return of the original spider diversity. I would also expect species that live in the ground or in leaf litter to be somewhat less adversely affected by the clearing than those species that live in vegetation, though this would depend on how drastic the clearing process was.”

Take a closer look: observations of a digital naturalist

Appendices, acknowledgements and thanks